Britain’s unctuous policy towards Zimbabwe has been embarrassed by tanks on the streets of Harare and civilians randomly gunned down by soldiers. 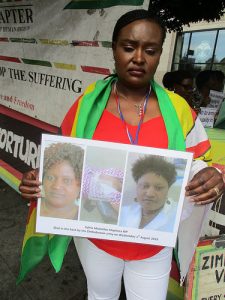 Among the dead was Sylvia Matambo Maphosa, aunt of Vigil activist Daizy Fabian, shot in the back on her way home from work. Daizy was at the Vigil today to speak to the media. She will be among Vigil representatives at a meeting at the Foreign Office on Monday at which we will express our opposition to Mnangagwa’s military regime.

At least Daizy can speak openly in London. ZWnews.com says the family in Harare were visited by the military and told to keep quiet about it (see: https://zwnews.com/military-gags-shooting-victims-family/).

Mnangagwa described the elections as a ‘festival of unfettered freedom’ and a ‘celebration of democracy’. Some celebration . . . some democracy . . .

Apart, predictably from Zimbabwe’s compliant neighbours, most foreign observer missions, including the EU and Commonwealth, expressed reservations about the elections, which MDC President Chamisa described as a sham, although the independent Zimbabwe Election Support Network stopped short of backing this up.

But it certainly jarred to hear the US State Department blithely exhorting Zimbabweans to ‘show magnanimity in victory and graciousness in defeat’. (See: https://www.reuters.com/article/us-zimbabwe-election-usa/us-says-reviewing-results-of-zimbabwe-election-idUSKBN1KO2LO.) The Vigil had always regarded the US as one of the more scrupulous critics of the Zanu PF regime. Are they now adopting Mnangagwa’s ‘forgive and forget’ mantra?

The big question for the MDC was why it repeatedly takes part in elections it cannot win. It keeps threatening to boycott them and then, buoyed by popular support, leads its valiant supporters to yet another rigged election.

Rallies by Chamisa were packed out while Mnangagwa had to rely on the security forces to stop people leaving his. But Mnangagwa remained confident despite his lack of appeal. We know why. And so does everyone who understands how tyranny works: fixing the vote is now a well-established international practice (see our diary of 31/03/2018: http://www.zimvigil.co.uk/the-vigil-diary/931-snivelling-bullies-zimbabwe-vigil-diary-31st-march-2018).

How can you fight a party that has unlimited state funds, controls the state media, the electoral commission, the judiciary, the army and the police, which locks down people in the rural areas with intimidation, threats and bribes?

In last week’s diary we referred to an article by Zimbabwean political analyst Simukai Tinhu. He concluded: ‘If Chamsa takes part in the presidential election, he will have demonstrated that he has learnt nothing from his party’s previous bitter experiences.’ His article is worth another look (see: https://www.zimbabwesituation.com/news/boycott-presidential-poll-chamisa/).

But Mnangagwa now faces a bigger problem: how is he to convince the world that he and not the army is in charge. The Vigil thinks that rampaging soldiers in Harare have revealed the truth. No amount of flamboyant Zimbabwean scarves will help rebrand his regime.

FOR THE RECORD: 49 signed the register.