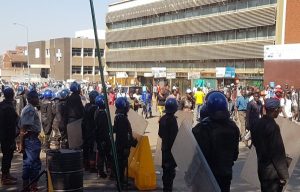 ZIMBABWEAN authorities have intensified their crackdown on opposition political party supporters after
arresting more people following protests staged in Harare after the announcement of results for the
harmonised elections held last month.

Zvobgo, Mubaiwa and Mutegude appeared in court on Monday 06 August 2018 together with 24
others, where their lawyers applied for their release from custody on bail, which the National
Prosecution Authority represented by Michael Reza opposed.

In their bail application, Zimbabwe Lawyers for Human Rights lawyers namely Gift Mtisi, Kossam
Ncube, Lizwe Jamela and Denford Halimani and James Makiyi of Makiyi and Partners Legal
Practitioners, who are representing the 27 people, denied that their clients committed the alleged
offence.

The human rights lawyers told Harare Magistrate Nyasha Vhitorini that most of their clients were
arrested at Morgan Tsvangirai House, where they had gone to surrender some election return materials
and where they were waiting to receive their transport and food allowances after serving as election
agents for the MDC Alliance party in Uzumba Maramba-Pfungwe constituency in Mashonaland East
province during the just ended harmonised elections.

The ZLHR lawyers stated that their clients, who also include some MDC Alliance party employees, had
sought refuge and locked themselves inside Morgan Tsvangirai House, from where they were arrested
by ZRP officers, after some members of the Zimbabwe Defence Forces began firing gunshots outside
the opposition party’s headquarters.