Zimbabweans are eagerly awaiting the results of the presidential election after the ruling Zanu-PF party won the majority of seats in parliament. Follow the live update here 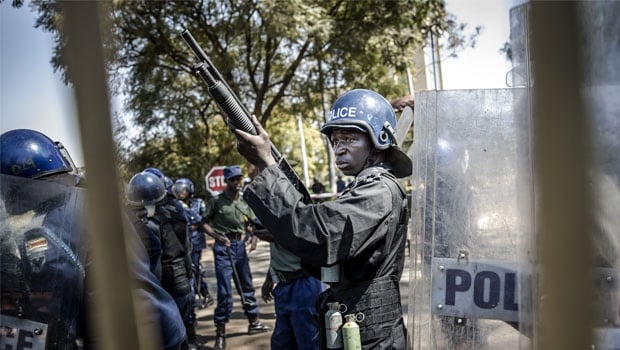 ShareIcon
Watch this video of the moment when MDC supporters started protesting in capital Harare.

An uneasy silence is settling over Zimbabwe’s capital after people fled military and other security forces firing live ammunition to break up opposition protests over Monday’s election results.

At least one person was killed.

Soldiers are stationed at intersections in Harare as the sun begins to set.

Hundreds of angry opposition supporters had gathered outside the compound of the electoral commission before scattering as the military moved in.

The violence came shortly after Western election observers urged the release of the presidential results as soon as possible and warned that a delay could lead to “volatility”.

ShareIcon
Here is a video of the MDC supporters before they were dispersed by the military and riot police in Harare.

#Zimbabwedecides2018 opposition supporters in Harare before they were dispersed by the army and riot police
Video credit @cyrusnhara_4787 pic.twitter.com/iqhPPrOIcu

ShareIcon
SABC is quoting the Zimbabwe Electoral commission as saying that the results of the heavily disputed presidential election will be released on Thursday.

The Zimbawean electoral commission says it hopes to announce the results of the Presidential election tomorrow. This comes amidst the eruption of violence in the streets of Harare after the results of the National Assembly polls were announced earlier this afternoon.

ShareIcon
See this picture gallery of Zimbabwe soldiers and police clashing with MDC protesters P over alleged fraud in the country’s election.

ShareIcon
Nelson Chamisa has tweeted, thanking his supporters for voting for him. He maintains that he has won the election.

THANK YOU ZIMBABWE …I’m humbled by the support you have given to me as a Presidential Candidate. We have won the popular vote. You voted for total Change in this past election!We have won this one together. No amount of results manipulation will alter your WILL #Godisinit

ShareIcon
WATCH this video of cars burning in Harare.

No one is above the law. Those that incited this malicious destruction of property have to face their day in court pic.twitter.com/07z8bSbJbe

ShareIcon
“Those same tankers ‘we’ celebrated last year in November are being used against us,” says one shocked Zimbabwean after armed troops moved into the capital to disperse opposition protests over disputed election results.
GET THE FULL STORY HERE

Zimbabwean soldiers are occupying intersections in Harare and a military helicopter flies overhead.

People scatter as armored vehicles speed by with sirens wailing.

“They are killing us,” a man shouts.Some protesters threw bricks into a main road with a military truck parked nearby, then ran when police trucks with water cannon raced toward them.

This is the first time Zimbabwe’s military has been on the streets of Harare since the removal of longtime leader Robert Mugabe in November. At the time the military was met with cheers and selfies. – AP