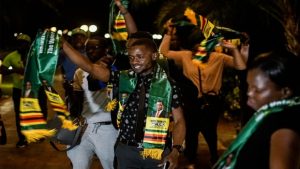 “We won this election and we are ready to form the next government,” Chamisa told a press conference, after President Emmerson Mnangagwa of the ruling Zanu-PF was declared victor with 50.8%of the vote. – AFP

ShareIcon
Chamisa responds to question on Mugabe by saying he doesn’t know if he voted for him. His possible support doesn’t make him an ally

ShareIcon
Chamisa says he would not attend Mnangagwa inauguration

ShareIcon
On election results as well as SADC, Chamisa says Zimbabwe hasn’t known peace for 38 years. We are back to where we were in 2008

ShareIcon
Question on SADC. Chamisa says he is in the process of engaging Cyril Ramaphosa

ShareIcon
Chamisa refuses to reveal his strategy going forward. We must be transparent but we cannot be naked

Chamisa: You may think that. We have institutions that support the will of the people

Questions and answer session now. A journalist asks what MDC makes of an independent tally by an NGO observer group which corroborates ZEC results.

Chamisa says he doesn’t know what the journalist is talking about. Sticks to his original figure. Has political reasons for not giving final figure ShareIcon
Chamisa: We do not believe in violence even if we have the capacity to resort to arms

ShareIcon
Chamisa: We will pursue all legal and constitutional routes because Mnangagwa cannot form a government. Also appeals to international community to support “the credentials of democracy”

ShareIcon
Chamisa: We are not accepting fake results. We want a proper result to be announced

ShareIcon
Chamisa: When they announce at night they want to give you a darkness result. Their rigging was poor; Mugabe was at least sophisticated. Their numbers don’t even add up

Chamisa claims MDC results show he had 2.3 million votes and Mnangagwa under 2 million

ShareIcon
A camera falls from a window above, starling people. “Don’t worry we are covered by the Holy Ghost” Chamisa jokes

ShareIcon
Chamisa: ZEC are very malleable and liberal with their futures. Says these don’t add up

ShareIcon
Chamisa: They inflated Mnangagwa‘s vote, which is why they did not announce by constituency but by province

ShareIcon
Chamisa: I hope Mnangagwa is open for the business of democracy and transparency

ShareIcon
Chamisa: We want to advise Mr Mnangagwa if he is a born again let him honour his pledge for free and fair election. He must be honest and sincere

ShareIcon
Chamisa: We are going to be challenging a number of election results. Already got advise on legality of results

ShareIcon
Chamisa: the bar of an acceptable election result will not be lowered just for expediency ShareIcon
Chamisa: because we won this election we are ready to form this government

ShareIcon
Chamisa: A misunderstanding characterised this election. Result is fraudulent and illegitimate

ShareIcon
Chamisa: Mnangagwa did not win this election. MDC won the elections. We have a tally to prove it. Proper verification of results wasn’t done

Chamisa thanks Zimbabweans for voting and being tolerant. It’s not easy. Even with their bastardizing we managed to score 2 million votes

He thanks journalists for the coverage

ShareIcon
Chamisa: if you go around country there is no celebration. Today is a day of morning of a repeat of what we have seen in the past

ShareIcon
Chamisa: Many of our people had been visited and interrogated for abiding in an election. The thank you we have been getting for taking part in election as law abiding citizens is a thank you of bullets, tanks, guns ShareIcon
Chamisa: This is the behaviour of people who lost and not won an election

ShareIcon
Chamisa greets journalists and calls this a turning point press conference. If police can do this with press conference, what more with ordinary people, he says. – Carien du Plessis

Zimbabwe’s president says the scenes of riot police dispersing journalists waiting for an opposition briefing “have no place in our society.

Zimbabwean riot police with batons and shields are now leaving after breaking up a press conference by opposition leader Nelson Chamisa, who has alleged rigging of the presidential election.

Police chased away reporters without explanation but ruling party officials are now urging reporters to attend the briefing. There is no sign of Chamisa. – AP

ShareIcon
MDC opposition leader Nelson Chamisa arrives at the Bronte Hotel in Harare for a press conference minutes after he was broken up by several dozen riot police armed with tear gas cannisters, as Zimbabwe’s opposition rejected today what it said were the “fake” results of landmark elections. ShareIcon
Chamisa walks in to applause. Some supporters come in from outside with journalists. They are now singing – Carien du Plessis

MDC supporters are now dancing and chanting around the police truck as police get on and then off again.

The public order act prohibits political gatherings. Police don’t seem to be acting. There is a host of local and international journalists on scene – Carien du Plessis

ShareIcon
“I’m told it was apparently a misunderstanding. Police claim to have thought this was a political gathering. Police had to be convinced that this was a press conference and we are now back inside the hotel grounds.” – Carien du Plessis

ShareIcon
Zimbabwe anti-riot personnel arrive at The Bronte Hotel in Harare where international journalists and observers are gathered for a press conference by MDC leader Nelson Chamisa. (AFP)
Post published in: Featured