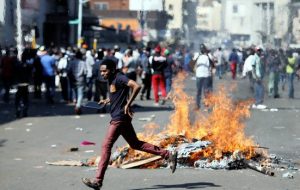 Following a relatively peaceful 30 July 2018 plebiscite, violent protests broke out in Harare on 1 August 2018.  The Zimbabwe National Army, (ZNA) was deployed into the streets, indiscriminately shooting and assaulting civilians. 6 people died from gunshots  and  many  others  were  injured.   Violence  broke  out  in  mostly  high  density suburbs and villages as the military and ZANU PF activists hunted down opposition activists.  This reports captures the reports documented by members of the Zimbabwe Human Rights NGO Forum from 1 to 9 August 2018.  A total of 199 violations have been documented in this period. This report was compiled by the following members of the Forum: Amnesty International Zimbabwe, Counseling Services Unit, Zimbabwe Lawyers for Human Rights and Zimbabwe Peace Project.

2.0      Methodology
The information used is derived from:
▪   Citizen reports received via the Ziso/Ilihlo platform;
▪   Reports from the Forum’s member and partner organisations;
▪   The Forum’s Public Interest Unit;
▪   General reports from walk in clients; and
▪   Verified media reports.In addition, the Forum Secretariat and members deployed a team of monitors  and lawyers  to  observe  and  assist  victims  in  Harare  Central  Business  District  (CBD), Dzivarasekwa,  Highfields,  Chitungwiza,  Waterfalls,  Kuwadzana  and  surrounding areas.  Reports  were  collected  by  human  rights  monitors  across  the  country  and shared across the network.   In order to ensure a coordinated response to cases of organised violence, members operating on the ground came together to share and verify information as well as to coordinate responses. This is the first report by the consortium which covers the period 1  to 9 August 2018. A total of 199 violations were documented from 1 to 9 August 2018.

NB:Figures   reported   here   are   estimates   based   on   actual   interventions   and confirmations by members of the Forum. Investigations are ongoing and the Forum will give weekly updates regarding the situation4.0      Summary of violations Violations
a)  Extra-Judicial Killings –   Six (6) people were shot dead by army personnel following military deployment into the streets on the 1st  of August.  The Forum has been in touch with some of the families.  Only one family of the deceased received monetary support to the amount of $1000 from the Civil Protection Unit.  The  Forum  could  not  confirm  if  other  families  managed  to  receive anything.   The  families  stated  that  they  experienced  problems  in  collecting bodies of their loved ones as hospitals tried to force them to accept documents that indicated knife stabbing.

b)  Assaults – From 1 – 6 August 2018, the responders received calls from people in  high  density  suburbs  who  reported  that  the  military  was  moving  around beating up residence. The assailants were identified by the witnesses as they disembarked from military vehicles, clad in military attire camouflage   armed with AK Rifles and sjamboks.  It was reported that there were two groups.  The first  group  was  beating  people  at  random.   The  second  group  had  a  list  of names of opposition supporters that they were hunting for.   It was reported that they  went door  to  door  beating  them  up.   In  the  rural areas, assaults  were reported of members of the ruling party who attacked opposition persons who had been acting as polling agents. Monitors from the Forum were informed that some of the victims tried to seek medical help at Chitungwiza General Hospital but were turned away.   The Forum interviewed one of the doctors who later assisted the victims at a private facility. The medical practitioner confirms that he  saw  the  military  vehicles  in  the  area.  The  total  number  of  assaults    is estimated to be forty five (45) and Seven (7)  non-fatal gun shots by the time this report was compiled. The victims, some of which had bullets lodged in their bodies including a deaf and dumb 44 year old male victim and some with soft tissue injuries  received medical treatment.

c)  Abductions   –   Further   reports   of   abductions   and   arrests   of   opposition supporters were reported.  The total number of abductions reported is Sixteen (16). Four (4) of these people were abducted in Highfields only to be  found heavily  tortured  by  unknowns  assailants  whom  the  victims  believe  to  be members of the military  whilst one (1) person  was  abducted in  Mutoko and managed to escape the assailants. Another MDC Alliance polling agent was abducted on 7 August 2018 in Marondera.  He was found in Goromonzi on 8 August 2018.  He was tortured and stripped by four (4) assailants.d)  Destruction of property   – Seven (7) cases of destruction of property were recorded.   Vending stalls in the CBD and other suburbs such as in Highfield were  destroyed.  It  is  not  clear  who  destroyed  the  stalls  although  vendors interviewed claim the army is responsible. In an incident verified by the teams on the ground in Lusaka, Highfield, a tuckshop was destroyed by soldiers and an amount between $200 to $300 was taken from the victim.  In Mutoko East, in Chihwayi Village, Ward 17,  an MDC Alliance polling agent had his two (2) houses  burnt  in  the  evening  of  6  August  2018.  All  clothing  and  food  was destroyed.  The same person was also a victim of arson in 2008.

e)  Harassment and intimidation – Various cases of harassment and intimidation by the military have been reported mainly from the opposition’s supporters and polling   agents.   The   highest  cases  have   been   reported   in   Chitungwiza, Kuwadzana, Highfield, Dzivarasekwa and Mbare. However, reports have also been  received  from  other  provinces  such  as  Midlands,  and  Manicaland.  In Hurungwe West, on 7 August 2018, an MDC A polling agent was harassed by ZANU  PF  supporters  for  being  a  polling  agent.  In  Mutoko  East  Ward  15, Headman Nyamashuka is reported to be compiling names of polling agents. In Guruve,  Chifamba  Village, Ward  12,  a  ZANU PF  Chairperson  threatened  a villager who had been a polling agent for an independent candidate.  Number of violations is estimated at Twenty Seven (27).

f)    Raids of Offices and Homes, Suspicious Visits – MDC Alliance offices and members’  homes  have  been  raided  across  the  country.   Other  raids  were reported from people who acted as polling agents for the opposition. A number

of civil society members have also been visited at their homes, and arbitrary searches  have  been  done. Whilst  in  most  cases  those  responsible  were  in civilian clothes (identifying themselves as police), in  some instances, armed uniformed members of the police and army have also been involved. Two (2) civil society organisations and their leaders have reported raids at their homes and offices by suspected security personnel.

The Forum urges the Government of Zimbabwe to stop all forms of retributive violence perpetrated on  real and perceived supporters of the opposition political parties. It must further act to restore its integrity and commitment to peace.