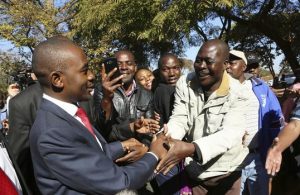 Still, his failure in his maiden campaign to become president of Zimbabwe put him in pole position for the next election, if he plays his cards right. He can dust himself off and proudly say that he gave President Emmerson Mnangagwa a run for his money.

His 44% measures up respectably to Mnangagwa’s skin-of-the-teeth 50.8! As for the delays in announcing the 10th province on Thursday night, it is beyond me; but, the lingering suspicion that the counting was doctored is not unfounded. Too much smoke.

In his premature declaration of victory at the July 30 polls he overestimated the momentum of the street protests a Zanu-PF victory would garner.

The military overreached in quelling the demonstrations on Wednesday. The rookie in the first post-Mugabe elections, Chamisa will certainly be back with more attitude in five years.

Among others, however, Chamisa’s tweets and statements were not irresponsible ahead of the announcement of election results.

“We have won the popular vote we have won this one together. No amount of results manipulation will alter your WILL,” he tweeted his 300000-odd followers.

His announcement ahead of the announcement, that the MDC Alliance would accept nothing short of a win, added to his errors and insufficient preparation time.

The much-more experienced Tendai Biti should have moderated the temper of the MDC Alliance.

Tragically, he too assumed that screaming electoral fraud and alleging attempts to abduct him ahead of the elections would win the day.

Election fraud is as hard to prove as it is to dismiss. All elections are prone to tampering.

However, Chamisa could learn a thing or two from Kenya and Liberia, which held their 2017 elections in August and October, respectively. In Kenya, Raila Odinga accused the Independent Electoral and Boundaries Commission of manipulating the election results to hand a victory to Uhuru Kenyatta and his Jubilee party.

He challenged the outcome in court and won. Curiously, he abstained from the rerun of the poll ordered by the court; only to inaugurate himself as the parallel president. After many deaths of his dispensable followers, he shook hands with his rival and life went on.

Chamisa could take heart from the story of this former Fifa World Footballer of the Year. When at 40 he ran unsuccessfully for president against Ellen Johnson-Sirleaf in 2005, his followers also alleged fraud. Weah focused on the criticism against his lack of education.

He returned to school to complete his matric and a degree.

His second attempt, as Winston Tubman’s vice-presidential candidate in 2011, flopped; and he went for his Master of Management degree at his alma mater, Devry University.

Like a true sportsman, who fought his way from poverty in the slums of Monrovia to the biggest stage in foreign countries, Weah came back in 2017. His tenacity triumphed against a more seasoned politician and Johnson-Sirleaf’s deputy, Joe Boakai. He was inaugurated as the 25th president of Liberia on January 22, at a mere 51 years of age.

Even if Zanu-PF ill-advisedly fields Mnangagwa as their presidential candidate in five years, Chamisa could still run and lose; he must run again. In the meantime, he could use his time in parliament to gain more experience and consolidate his following.

The experience will rein in his urge to pronounce on election results in the future, however confident he feels.

It will also ensure that he avoids claiming that he “helped Paul Kagame to turn around Rwanda”.

Chamisa will make president one day; but just not now.

President Mnangagwa faces the slalom of restoring unity in a nation fractured not only by the peaceful elections turned abruptly violent, but by the high expectations of the post-Mugabe Zimbabwe; and the reality of rebuilding an economy while training Zanu-PF to change its spots.

Zimbabweans can change their fortunes, decisively; the time is now.

* kgomoeswana is an author, media commentator and public speaker on African business affairs and a columnist for Destiny Man – Twitter Handle: @VictorAfrica