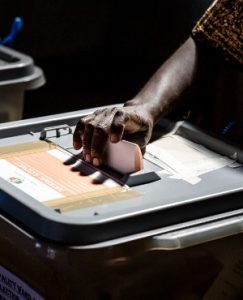 Ziyambi Ziyambi told state ZBC radio on Monday that the applications arrived after he’d already left his office on Friday. He said he’d written to the lawyers to get them to send the information on Monday, but had only received documents for one of the lawyers – Advocate Jeremy Gauntlett.

Chamisa has assembled a large team of lawyers, led by local advocate Thabani Mpofu, to present his election petition before the nine-member Constitutional Court on Wednesday.

He claims he was robbed of victory in the July 30 poll by the Zimbabwe Electoral Commission, which declared President Emmerson Mnangagwa the winner with 50.8% of the vote.

Chamisa’s spokesperson, Nkululeko Sibanda, played down the issue of the South Africans not getting permits.

“When we were talking to them we were clearly aware that the chances of them being allowed to operate in the country were very slim,” he told News24.

He said the MDC Alliance had hired the lawyers for their expertise and not necessarily to argue the case before the court.

“The brains and expertise don’t need a visa to operate in the country,” he added.

The high-profile case will be broadcast live by state ZBC on Wednesday, the first time TV cameras and microphones will be allowed inside a Zimbabwean court to record proceedings.

The local chapter of the Media Institute of Southern Africa is Tuesday due to make an urgent application to allow live-streaming of the court case via social media.

In a statement, the media watchdog said live streaming would reach a wider audience than “traditional radio and television channels”.