Zimbabwe was on edge awaiting the results of its historic presidential election after troops opened fire on protests against alleged electoral fraud. 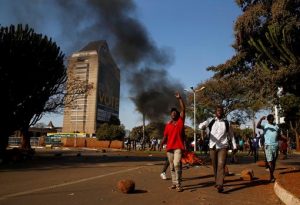 Harare, Zimbabwe – Zimbabwe was Thursday on edge awaiting the results of its historic presidential election after troops opened fire on protests against alleged electoral fraud, denting hopes of a new era for the country following the ousting of Robert Mugabe.

Monday’s polls — the first since autocratic president Mugabe was forced out by a brief military takeover in November — had been meant to turn the page on years of violence-marred elections and brutal repression of dissent.

But the mood quickly descended into anger and chaos as supporters of the Movement for Democratic Change (MDC) opposition declared they were being cheated in the election count.

“You said you were better than Mugabe — you are the picture of Mugabe,” shouted one young male protester wearing a white T-shirt. “We need security for the people.”

Soldiers fired on demonstrators during MDC protests in downtown Harare, AFP witnesses saw, with one man killed after being shot in the stomach.

Official results Wednesday showed that the ruling Zanu-PF party had easily won most seats in the parliamentary ballot — strengthening President Emmerson Mnangagwa’s prospects of holding onto power in the key presidential race.

MDC supporters, who say their leader Nelson Chamisa won the vote, burnt tyres and pulled down street signs as protests spread from the party headquarters in Harare.

Police confirmed the death toll of three, and Mnangagwa issued a statement blaming the opposition for the unrest and fatalities.

“We hold the opposition MDC Alliance and its whole leadership responsible for this disturbance of national peace,” he said, adding the government “went out of its way” to try to ensure the elections were peaceful.

Mnangagwa, 75, had promised a free and fair vote after the military ushered him to power in November when Mugabe was forced to resign.

In a late-night press conference, Home Affairs Minister Obert Mpofu warned that the government “will not tolerate any of the actions that were witnessed today”.

A credible and peaceful vote was meant to end Zimbabwe’s international isolation and draw in foreign investment to revive the shattered economy.

The MDC, which accuses the election authorities of falsifying results, said the army had opened fire “for no apparent reason” leading to the deaths of unarmed civilians.

European Union observers had earlier declared they found an “un-level playing field and lack of trust” in the election process. It called for transparency in the release of results.

“On many occasions — preparation, financing, media and hopefully not in the counting — it was advantageous for the ruling party,” EU chief observer Elmar Brok told AFP.

Under Mugabe’s 37-year reign, elections were often marred by fraud and deadly violence.

The Zimbabwe Electoral Commission (ZEC) said Wednesday that of 210 parliamentary seats, 205 had been counted with ZANU-PF winning 144 and the MDC Alliance 61.

“The results are biased, trying to give the impression that ZANU has won,” said Lawrence Maguranyi, 21, an MDC supporter and university student protesting at the party headquarters.

“We have won this one together. No amount of results manipulation will alter your will,” he tweeted before the army was deployed.

Partial results from the presidential race were expected Wednesday but in the end, there was no announcement. The electoral commission warned that final results of the presidential first round may not be known until Friday or Saturday.

Mugabe, 94, voted in Harare on Monday alongside his wife Grace after he stunned observers by calling for voters to reject Zanu-PF, his former party.

His attempts to position Grace as his successor are widely thought to have driven the military to intervene and put their favoured candidate, Mnangagwa, in power.

But Chamisa, a lawyer and pastor who performed strongly on the campaign trail, sought to tap into the youth and urban vote.

Mnangagwa was allegedly involved in violence and intimidation during the 2008 elections when then opposition leader Morgan Tsvangirai pulled out of the run-off after attacks claimed the lives of at least 200 of his supporters.