She is still on perfect after defeating the defending Champion WCM Kudzai Charinda and Tatenda Zengeni among her opponents who are strong. Colleta Wakuruwarehwa  was defeated by Bridget Pumuyo in a pulsating game. WCM Christine Makwena is still with a perfect five after routing all her opponents. She defeated Linda Shaba who was the joint leader. 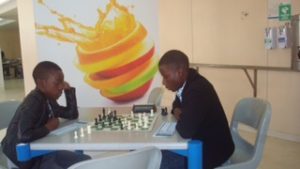 After defeat Linda was left on four points out of five games. The two players played their game which ended with rooks and pawns, eventually Linda Shaba misplayed in the ending resulting in a loss in a seemingly drawn game which had a lot of onlookers watching as the ending generated a lot of interest among the spectators.

One of the interesting games was the one which featured Linda Shaba and the young Tanaka Chikwavaire, the young player played very well against the seasoned experienced lady who lost after Tanaka sacrificed a rook for a pawn threatening a check mate in one. Linda had to sacrifice her queen to save the game which went beyond control. Eventually Linda lost a pulsating game in which the young lady (Tanaka Chikwavaire) won in the end game and she made sure that the game was finished in an interesting fashion.

Christine Makwena finished with 8 points out of 9 games played with seven wins and two draws. She drew against WCM Charinda Kudzanai and Tatenda Zengeni. Second place went to Linda Shaba who had 7 points while WCM Kudzanai Charinda came third and failed to defend her title which she won last year. Meanwhile in the Men’s nationals Emerald Mushore won the tournament with 6/9 games played in a round robin format. Second position went to Van Madanhi of the University of Zimbabwe.

The Pharmacist played very well defeating the former national champion Zhemba Jemusse in the final round of the tournament finishing with 5.5 points out of 9 games of play. The same applied to Elisha Thabo finished third with 5.5 points after defeating Paddington Dzinzi a student Doctor at the University of Zimbabwe who did not perform up to expectations. Vitalis Mapuranga and Mugove Muririma were tied on fourth position with five points followed by Zhemba Jemusse who had 4.5 points, Mwadzura Roy,and  Blessing Murasiranwa were all tied on 4.5 points.Tapiwa Chikwavaire came ninth with 4 points while Paddington Dzinzi came last with half a point which he got from a draw against Vitalis Mapuranga. open section there was a tie for the first position Chinhanga Tinashe and Donald Chinyama were tied on the first position. Donald came second on buccholz. They both scored 7.5 points out of nine points. In third position was Kudakwashe Zimbowa who is also a scholar at Seke 4 High school doing his Lower six there and also playing the game of chess as one of the best players in the Harare Provincial chess team. He had 7 points out of the nine games he played. Makamba Amos also finished with 7 points and was fourth. Albert Maketo and Ian Mashumba, Cecil Gwezere all finished with 6.5 points.

Mazani Julius, Mahlahla Jona, Hamandishe Farai, Dereck Chirengwa and Shinya George completed the list of all the players who made it in the top ten of the Candidates chess championships. Makomborero Garamukanwa of Highfield high 2 performed very well by ensuring that he drew against  Ian Mashumba in a pulsating game. He was the third best scholar after, Farai Hamandishe and Kudakwashe Zimbowa respectively. There were 68 players who took part in the Candidates section, while twenty -four ladies battled it out in the ladies nationals and ten men took part in the men’s nationals. The Chief Arbiter for the tournament was International Master Simbarashe Murimi who was assisted by FA Chimbamu Victor, FA Clive Mpambela, National Arbiters J. Ndoro and James Vhezha.

Generally, the tournament was full of exciting chess though some players who would have played in the men’s nationals did not make it. The likes of : CM Spencer Masango, International Master Rodwell Makoto, Elisha Chimbamu, Dion Moyo, Gibson Malije, and Castro Sibanda failed to take part in the tournament after missing on the registration deadline. This raised some eyebrows to those who wanted to play since there was a penalty for late registration. We hope that this anomaly will be corrected next time when players register as per requirements and play according to the stipulated regulations.