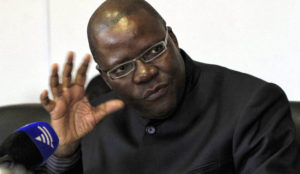 Biti fled to Zambia from Zimbabwe on Wednesday morning in a bid to seek political asylum in the neighbouring state. However‚ Zambia has reportedly denied the veteran opposition political asylum‚ arguing that his grounds for asylum are weak‚ according to the BBC.

Zimbabwean authorities have been seeking to arrest Biti for allegedly inciting demonstrations that took place in central Harare last week.

Dramatic scenes on Wednesday morning at the Chirundu border post that links Zimbabwe and Zambia over the Zambezi River‚ saw Biti being dragged by an unidentified mob in what was widely reported as an arrest.

However‚ it turns out according to a police report that the mob was actually assisting Biti to evade arrest.

“The accused person and his associates were approached and he strongly resisted arrest arguing that he was protected by international law since he had already crossed the Zambezi River and was in the process of applying for asylum.

“He went further to state that police officers had no right to interview him on foreign soil hence all the accused persons refused to furnish their full particulars‚” read the police report by CID to the CIO head in the region.

The police report claims that the Zambian security details warned their Zimbabwean counterparts against interfering as‚ “a team of Zambia Para Military Troop armed with AK 47 rifles came to the border and escorted the accused person”.

Biti is in Zambia where his intention is to seek political asylum.

“He wanted to seek asylum but his grounds are not meritorious. As it is‚ we are just keeping him for safe custody before he heads back to Harare‚” Zambian Foreign Affairs Minister Joe Malanji told the BBC.

“It is not up to us to tell when he’s going back; it’s up to the Zimbabwean authorities‚” he added.