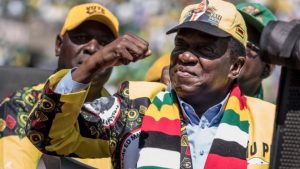 Mr Mnangagwa got more than 50% of the vote, avoiding a runoff poll

With all 10 provinces declared, Mr Mnangagwa won 50.8% of votes to 44.3% for opposition leader Nelson Chamisa.

Police removed opposition officials from the electoral commission stage when they rejected the results.

The chairman of Mr Chamisa’s MDC Alliance said the count could not be verified.

By winning more than 50% of the vote, Mr Mnangagwa avoided a second run-off election against Mr Chamisa.

Mr Chamisa has insisted he has won the presidential poll, telling reporters on Thursday the ruling Zanu-PF party was “trying to bastardise the result”, something that “we will not allow”.

But the Zimbabwe Electoral Commission (Zec) said there was “absolutely no skulduggery”.

Opposition supporters protested in Harare over alleged vote-rigging, which led to six deaths on Wednesday.

The elections were the first since long-time ruler Robert Mugabe, 94, was ousted in November last year.

The polls were intended to set Zimbabwe on a new path following Mr Mugabe’s repressive rule.

Harare was a ghost town on Thursday following Wednesday’s violence, as troops patrolled the city centre ordering people to “behave”.

Mr Mnangagwa said the government was in talks with Mr Chamisa to defuse the crisis and proposed an independent investigation to bring those who were behind the violence to justice.

“This land is home to all of us, and we will sink or swim together,” Mr Mnangagwa said in a series of tweets.

Has his plea been heeded?

No violence was reported on Thursday. A truckload of armed policemen and soldiers were driving around the city shouting, “Behave yourself, people of Zimbabwe.”

Riot police raided the headquarters of the MDC Alliance, and detained about 10 people.

A BBC reporter in Harare says the city centre is like a ghost town.

Police said three people died in hospital, bringing to six the number killed in the unrest.

Another 14 people were injured in the violence, police added.

In his first public appearance since the election, Mr Chamisa visited some of them in hospital.

He said the MDC Alliance accepted defeat in the parliamentary election, but not in the presidential poll.

Zanu-PF, in power since the country gained its independence 38 years ago, has won a two-thirds parliamentary majority.