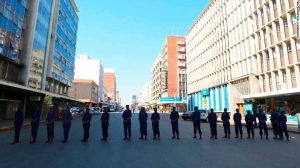 Zimbabwe police officers block the road leading to the opposition offices in Harare, Zimbabwe, Thursday, Aug. 2, 2018. Zimbabwe’s acting President said Thursday that his government had been in touch with the main opposition leader in an attempt to ease tensions after election related violence in the capital. (AP Photo/Tsvangirayi Mukwazhi)

On Thursday night, Mnangagwa was declared winner of the election, the country’s first since the toppling of veteran leader Robert Mugabe, with a slim lead over Nelson Chamisa, head of the Movement for Democratic Change (MDC).
Mnangagwa, who took over the ruling Zanu-PF party from Mugabe last year and was appointed President, won 50.8% of the vote, the election commission said, just enough to avoid a runoff. Chamisa received 44%.
The president tweeted that he was “humbled” by the result. “Though we may have been divided at the polls, we are united in our dreams,” he added. “This is a new beginning. Let us join hands, in peace, unity & love, & together build a new Zimbabwe for all!”

I am humbled to be elected President of the Second Republic of Zimbabwe.

Though we may have been divided at the polls, we are united in our dreams.

This is a new beginning. Let us join hands, in peace, unity & love, & together build a new Zimbabwe for all!

Twitter Ads info and privacy
On Thursday before the results were released, the MDC’s spokesman had insisted that Chamisa was set to win the presidential vote held on Monday.
“If the result is such that if we didn’t win, then certainly it’s not the reflection of what the people of Zimbabwe did on the 30th,” Nkululeko Sibanda told CNN.
Komichi and other opposition party members who questioned the count were escorted out of the room on Thursday night before the final vote was announced. 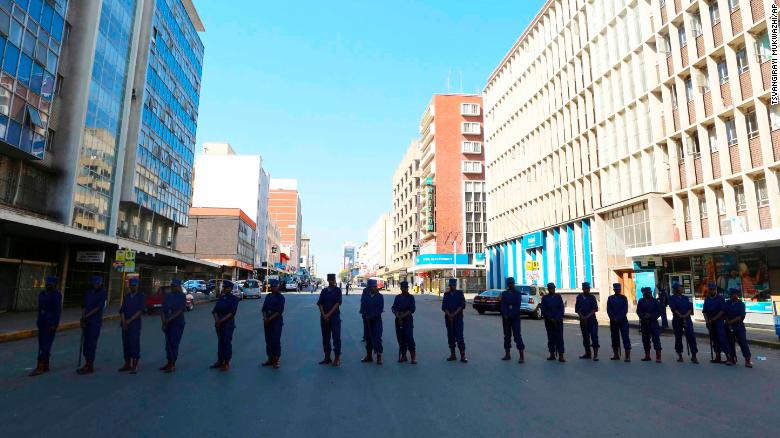 Zimbabwe police officers block the road leading to the opposition offices in the capital Harare on Thursday.

The results came amid fears of further unrest and doubts about how international observers will view Mnangagwa’s victory in an election tarnished by violence and allegations of poll rigging.
On Friday, South African President Cyril Ramaphosa called on all parties to accept the election result and “follow legal remedies provided for in the constitution and electoral law.”
In a statement, Ramaphosa said he had “called and congratulated” Mnangagwa on his election as president and expressed a commitment to “enhance the historical, political and fraternal relations which exist between South Africa and Zimbabwe.”
The statement is likely to be interpreted as an important endorsement for Mnangagwa, as he looks to defuse tensions and consolidate his victory.
Zimbabwe is anxious to ensure the elections are considered free and fair in order to lure back foreign investment and resuscitate the country’s ailing economy.
Partial results of the parliamentary vote, announced Wednesday, gave Zanu-PF two-thirds of the seats in the National Assembly’s lower house, prompting opposition supporters to take to the streets of the capital Harare in protest against allegedly fraudulent results.
Six people were killed in clashes between protesters and security forces, eliciting statements of concern from the United States, the United Nations and the United Kingdom. Mnangagwa called for an independent investigation into the violence.
On Thursday, police arrested 18 people during a raid at the MDC headquarters, Zimbabwe Republic Police spokeswoman Charity Charamba said. The charges were not immediately clear, but he added that 26 people suspected of inciting violence during Wednesday’s protests were taken into custody. 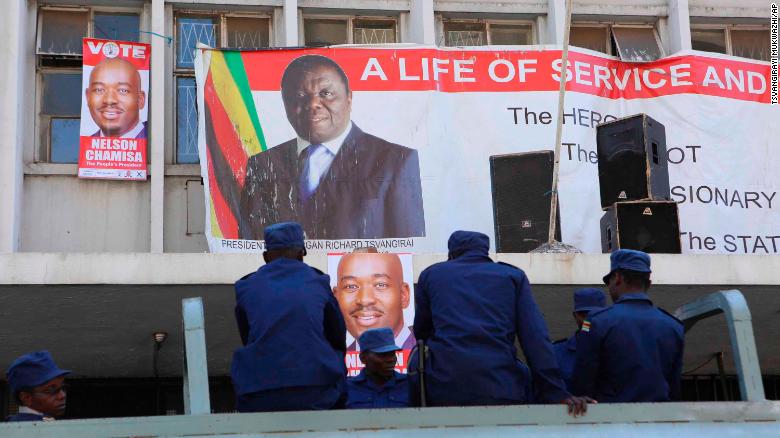 Zimbabwe police are seen outside the opposition party headquarters on Thursday.

Mnangagwa, 75, who replaced Mugabe after serving him for decades, took power after helping orchestrate a de facto coup against Mugabe in November.
Known as “the crocodile” for his political cunning and longevity, he has tried to rebrand Zanu-PF, pledging to heal divisions and rebuild the country.
But Mnangagwa is still widely considered to represent a continuation of Mugabe’s rule because he worked closely with the former leader for more than 40 years, first as his special assistant during the 1977 liberation war, and later as security minister and justice minister.
Mugabe, 94, who voted in Harare on Monday with his wife Grace, called on voters to reject ZANU-PF, his former party.
“I can’t vote for the people who have brought me into this state,” said the former autocrat, who ruled the country for 37 years.
Chamisa, who at 40 is the country’s youngest-ever presidential candidate, had aimed to appeal to younger voters with promises of electoral reform, tax cuts and jobs.
He took over the leadership of the MDC after the death of its founder and longtime anti-Mugabe activist Morgan Tsvangirai, who died from cancer in February.
Zimbabwe, which suffered crippling hyperinflation under Mugabe, desperately needs the International Monetary Fund to start giving it loans again. It also needs the US, European Union and others to lift sanctions.
Post published in: Featured