The much anticipated 2018 watershed harmonised elections in Zimbabwe have come and gone. The biggest losers in this election were the electorate. They are losers because most voters don’t know what happened to their vote. There is no one to account to what happened to the people’s votes. 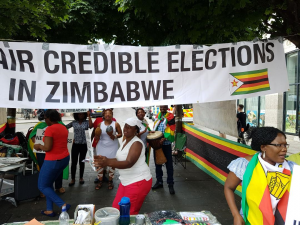 The custodians, the keepers and those responsible for the people’s votes, the Zimbabwe Electoral Commission (ZEC), cannot give a transparent and accurate account of what happened to the people’s votes. ZEC cannot give a clear account of how people voted. The Zimbabwe Electoral Commission couldn’t account for the most crucial presidential vote result. The contentious result needed the intervention of the Constitutional Court to settle the contentious and disputed result. It needed the intervention of the highest court in the land to legitimise the winner.

The main opposition, the MDC Alliance, made their supporters believe that their candidate, Nelson Chamisa had won the Presidential vote according to how people had voted. But the result that was announced by ZEC on the wee hours of the 3rd of August made the incumbent Emmerson Dambudzo Mnangagwa of Zanu PF the winner. ZEC announced that Emmerson Mnangagwa had crossed over the line to avoid a run-off with his nearest rival Nelson Chamisa with a mere thirty-one thousand votes only. This announcement was preceded by violence and demonstrations by opposition activists and supporters on the 1st of August protesting at the delay of announcing the Presidential vote result and the National Assembly result that opposition supporters’ thought didn’t reflect the way people had voted. The supporters were incensed by the pattern in which the results were being announced and thought that this was being deliberately done by ZEC to justify rigging and manipulation of the actual vote.

The government reacted to the protests with brutal force and heavy handedness which resulted in the death of at least six people. The government used the army instead of the Zimbabwe Republic Police which is professionally trained to deal with civil unrest than the army. This shooting of innocent civilians was condemned by the international community and all who care about human life. There was no justification to deploy the army on the streets of Harare as the demonstration wasn’t neither too violent nor too big for the police to deal with. The only justification from one senior Zanu PF member was that the police voted for Nelson Chamisa and were therefore MDC sympathisers.

Election results are meant to be celebrated by winners and bring despair to the losers which is a natural reaction. But in Zimbabwe, elections are about life and death. Zimbabwe’s elections have always been characterised by violence before or after the actual voting. They have always been a subject of dispute between the main opposition MDC and Zanu PF since 2002. Elections in Zimbabwe has always meant the spilling of innocent blood before or after. This has meant that elections in Zimbabwe has always been subject to international scrutiny.  As the pre and post-election environment has always not passed international standards of transparency, fairness and credibility in the previous elections, this recent election offered Zimbabwe the opportunity to prove that Zanu PF has moved on since the fall of Mugabe. But this election unfortunately has failed to pass that test and it proves that Mugabe may have gone but the system that is Zanu PF is still intact. The leopard unfortunately hasn’t changed its spots. This unfortunately means that Zimbabwe will and shall remain under sanctions and international isolation because Zanu PF has failed to change and will not stop meddling in the running of elections. The system called Zanu PF needs to be dismantled for the country to be able to move forward and hold a free, fair and transparent election.

The fact that the election result was disputed, and it needed the intervention of the Constitutional Court to legitimise the “winner”, proves that those entrusted to conduct the elections have failed to exercise their authority and complete their given constitutional mandate in a transparent credible manner. There were a lot of obvious noted irregularities that emanated from the way the Zimbabwe Electoral Commission conducted this election. Only God knows how ZEC got away with this fraud from the court scrutiny. A personal scrutiny of the way ZEC conducted the elections shows that any competent independent court would not have let ZEC escape with this mess that they caused and the fraudulent way they came up with the winner of this election. This made me think that Stalin was right when he said, ‘It’s not the voters that decide the winner but the person who does the counting’. And ZEC in cahoots with the Constitutional Court have proved this quote right.

Mnangagwa is now indebted to the people who counted the votes and those who validated the fraud committed by those who counted the votes. We will soon find out that Mnangagwa doesn’t care about the electorate because he knows that the people didn’t vote for him. You will soon find out that Mnangagwa is a person who indicate right and turn left. Mnangagwa is going to be a leader who says what you want to hear in public but in private he will be saying and doing another. Don’t forget the influence of Chiwenga and the army. Mnangagwa is only going to please Chiwenga, the Zimbabwe National Army, ZRP and ZEC because these are the people and organisations that brought him and kept him in power and will always be indebted to them. The Constitutional Court judges will also want to be rewarded for legitimising an illegality. Mnangagwa will obviously now start purging his known and perceived enemies both within and outside Zanu PF to tighten his grip on power. Mnangagwa is also going to cause harm and untold suffering to the generality of Zimbabweans as a punishment for rejecting him at the ballot box.

Mnangagwa for the next five years is going to be using all state apparatus at his disposal to force his perceived enemies and opposition party leaders, activists and supporters into submission and silence them.

The Zimbabwe Electoral Commission has surely thrown Zimbabweans under the bus to be run over for the next five years and unfortunately the Constitutional Court has shamelessly been used to endorse the process that will confine Zimbabwe into the economic doldrums. Only God’s hand is needed to get us out of this one.