Cheryl Hendricks, Human Sciences Research Council Zimbabwe’s general elections on July 30 were being labelled as “historic”. For the first time since independence in 1980, the ballot paper featured the faces of new presidential candidates, Emmerson Mnangagwa and Nelson Chamisa. And, prior to the poll, there was no large scale violence by security institutions and youth militia, 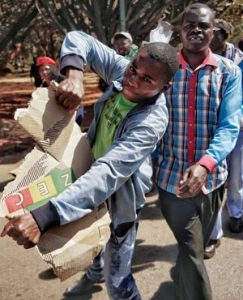 Supporters of the opposition party Movement for Democratic Change (MDC), tear up ballot booths durinas they demand results of general election on August 1, 2018 in Harare, Zimbabwe.
Zimbabwe’s ruling ZANU-PF party won the most seats in parliament, official results showed on August 1, 2018, but EU observers criticised the Zimbabwe elections for being held on an “un-level playing field”. / AFP PHOTO

Zimbabwe’s general elections on July 30 were being labelled as “historic”. For the first time since independence in 1980, the ballot paper featured the faces of new presidential candidates, Emmerson Mnangagwa and Nelson Chamisa. And, prior to the poll, there was no large scale violence by security institutions and youth militia, as had happened previously.

Indeed, the elections were peaceful and voters turned out in large numbers. But that’s where the good news ended as violence broke out after the release of the parliamentary results.

Supporters of the Movement for Democratic Change (MDC)- Alliance led by Chamisa marched to the Zimbabwe Electoral Commission’s command centre protesting against the slow release of the presidential election results. The parliamentary results were released early in the day, giving Zanu-PF (68%) of the seats. The MDC-Alliance was insinuating that the presidential results were being rigged.

The day before any results were released MDC-Alliance leaders had upped the ante by announcing they’d won, and saying that they wouldn’t accept any other result.

The army and police responded to protesters with the familiar brutality, leaving three people dead. In the space of two hours Zimbabwe went from having peaceful, free and fair elections, to ones marred by violence and accusations of fraud. The promise of a new dawn seemed to vanish instantaneously.

What went wrong? Are the parliamentary election results a reflection of voter rigging or of the MDC-Alliance’s own weaknesses?

Zimbabwe needed these elections to be credible, no matter who won. A legitimate government – with a strong mandate – can develop and implement a much needed national development plan to fix the country’s shattered economy.

Both presidential candidates and political parties promised peace and a new beginning. But, when the chips were down and the votes began to show a familiar trend of Zanu-PF dominance, both parties resorted to old tactics. MDC-Alliance resorted to disruption and discrediting the elections while Zanu-PF, through the security establishment, used undue force.

Accusations and counter accusations of who was to blame became the order of the day as they both plunged the country back into familiar chaos. These leopards were now revealing that they had not changed their spots, in full view of an international community they were hoping would come and invest after an election.

Last November the governing Zanu-PF ushered in a new political dispensation, via a military assisted transition that ousted former president Robert Mugabe. The party was never going to hand over power on a silver platter and would have been preparing for a win in what they no doubt expected to be a competitive race.

Zanu-PF always had the upper hand given its 38 years in power since independence. It had access to more funding, including state resources, that enabled it to run a more effective campaign. Its many huge billboards, advertising a re-imaged Mnangagwa, new vehicles and a flood of green party paraphernalia all indicated that it had invested large amounts of money in these elections.

The party also benefited from a biased state media. And it could also still ride on the wave of the sweeping changes it had brought about from November 2017, which included opening up the democratic space in terms of freedom of speech and association and movement.

The fact that these elections were held in full view of international and regional observers, that political parties were allowed to campaign freely, and that the run up to the polling day was largely peaceful, could all be credited to their new form of governance.

The MDC-Alliance went into the elections on a weak footing. They were fractured, having brought five parties together very recently in an alliance through the efforts of the young Chamisa. They didn’t have enough resources, nor time to mobilise effectively, though they still attracted thousands to their rallies in urban areas.

But the MDC-Alliance ran a campaign that focused mainly on the presidential elections. They pinned their hopes on Chamisa being able to woo a predominantly young Zimbabwean population eager to see change.

But after votes had been caste, the behaviour of the alliance’s two leaders left a lot to be desired. Tendai Biti and Chamisa declared themselves the winners of the presidential poll well before election results were announced by the Zimbabwe Electoral Commission. They also said they would not accept any result that did not declare them the victors.

This could have been partly responsible for the violence that erupted.

At a time when they needed to show good leadership, they employed the usual tactics of discrediting electoral processes before results were even announced. The situation wasn’t helped by the fact that the electoral commission took a long time to release the presidential results (citing procedures for the delay). This was bound to exacerbate tensions in a country with such very low trust in the electoral process.

The electoral commission has always been accused of being biased towards Zanu-PF. It should have developed mechanisms to alleviate distrust, and come up with a strategy to ensure that results were released without delay and through proper channels, and not through social media.

There were a few irregularities that were noted by all the observer missions. These included the voters’ roll not being available on time, too many assisted voters, the lack of an effective communication strategy by the electoral commission, media bias, and intimidation of voters, especially of women candidates.

It was certainly not a level playing field. But, the environment and irregularities were not deemed to be at a scale big enough to jeopardise the credibility of the elections.

It’s time political parties and individuals put their narrow self interests aside and act on behalf of Zimbabwe as a whole. This is the only way for the country to move forward.

If the MDC-Alliance claims Zanu-PF rigged the elections with the help of the electoral commission, the onus is on them to prove it. Till then, both parties need to sort out their differences as quickly and as peacefully as possible for the sake of the people of Zimbabwe, who have endured much hardship because of political elites intent on serving their own interests.