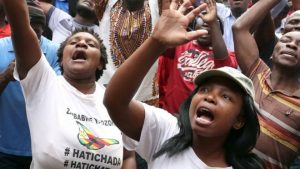 The MDC Alliance said the ruling Zanu-PF party was attempting to rig the vote to allow President Emmerson Mnangagwa to win, and the delay in releasing official results was unacceptable.

The electoral commission urged patience, saying it needed time to collate the votes.

The polls were the first since long-serving ruler Robert Mugabe was ousted.

The vote attracted a high turnout of 70% and was monitored by international observers.

Speaking at a press conference in the capital, Harare, the MDC Alliance’s Tendai Biti said there was a clear attempt by Zanu-PF to interfere “with the people’s will”.

He warned the party not to “plunge Zimbabwe into chaos”.

A Zanu-PF spokesman told the BBC he had “no clue” what Mr Biti was talking about.

And Home Affairs Minister Obert Mpofu said those who violated election rules by prematurely declaring victory risked incurring the “wrath of the law”.

Zanu-PF, which has been in power since Zimbabwe won independence from Britain in 1980, has been accused of rigging previous elections to keep Mr Mugabe in office.

Mr Mnangagwa has promised a free and fair election.

What’s been the reaction on the streets?

There have been celebratory scenes outside the MDC Alliance headquarters in Harare.

Crowds have been blocking the road, singing and dancing, since Mr Biti said that Mr Chamisa had won.

A truckload of policemen and water cannon drove near the building in an apparent show of force.

However, many businesses reopened on Tuesday after being shut on voting day, a public holiday.

When will we know the official winner?

The Zimbabwe Electoral Commission (Zec) has until Saturday to announce the results but its chairwoman, Priscilla Chigumba, said she expected the announcement to be made well within that deadline.

“We will not subvert [the people’s will],” she said at a press conference, rejecting allegations that there had been ballot rigging.

Both men are among 23 candidates running for president.

Zec has announced some of the results in the parliamentary elections but says it needs time to pull together the figures for the presidential poll from across the country.

A presidential candidate needs more than 50% of the vote to win outright. Otherwise, a run-off election will be held on 8 September.

In a tweet, Mr Mnangagwa expressed confidence about his chances but added that he was “waiting patiently for official results as per the constitution”.