HARARE (Reuters) - Zimbabwean President Emmerson Mnangagwa has filed submissions in the land’s highest court opposing a court challenge to his victory by main opposition leader Nelson Chamisa, one of his lawyers said on Wednesday. 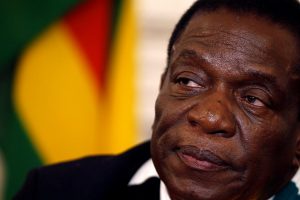 The first election since Robert Mugabe was forced to resign after a coup in November had been expected to end Zimbabwe’s pariah status and launch an economic recovery but post-election unrest has brought back uncomfortable reminders of its violent past.

Mnangagwa has urged Zimbabwe to unite behind him but questions remain over the death of six people in an army crackdown on protests against the ruling party’s victory.

Chamisa has said the vote was rigged and has challenged the result by the Zimbabwe Electoral Commission, which gave Mnangagwa 2.46 million votes against 2.15 million votes for the 40-year-old Movement for Democratic Change leader.

Paul Mangwana, the ruling party’s legal affairs secretary and one of Mnangagwa’s lawyers said Chamisa would now be required to respond to Mnangagwa’s application before the matter is set down for a hearing.

“We have successfully filed our opposition papers to this application, which we think is just a waste of time but that’s for the courts to decide,” Mangwana told reporters outside the Constitutional Court.

“Our team of legal practitioners is ready to meet the MDC Alliance in court,” he said.

Another of Mnangagwa’s lawyers, Lewis Uriri told the official Herald newspaper’s online edition that he had asked the court to dismiss Chamisa’s application, which he said had missed a 10 a.m. (0800 GMT) deadline last Friday.

A lawyer representing Chamisa said he could not comment because he had not yet been served with Mnangagwa’s papers.

The constitution requires a losing presidential candidate to file any challenge within seven days of a winner being declared.

The Constitutional Court, whose decision is final, can uphold the result, declare a new winner, order a fresh election within 60 days or make any other ruling it deems fit.

The court must rule within 14 days of an election challenge being lodged. The days do not include weekends and public holidays according to the court rules.