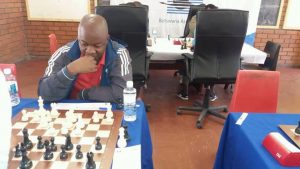 Like wine Spencer seems to be getting better with age and he proved that hardwork produces the best results in a field with the Tswanas themselves, Zimbabweans, Zambian Fide Master Geoffrey Luanja who is the holder of the 2018 Easter Open Championship, here in Zimbabwe. He won the tournament with 6.5 points out of 7. The games were so pulsating that one never thought that a player with a rating of 2121 could lift the coveted trophy for the tournament.

He defied all odds including the author by winning in such a star-studded field with some International Masters and Fide Masters. Geoffrey Luanja of Zambia was the highest rated player with a rating of 2304 making him the most feared player psychologically. The paper appearance of players did not match the field of play practically. International Master Providence Oalthose of Botswana was tied on second player with Phemelo Kheto player after the two drew in the final round to finish on 6 points. If any of the two players one the game then there was going to be a tie on the first place.

He is also a member of the chess team that will be traveling to Batumi, Georgia for the chess Olympiad. We hope the team will perform to the best of their ability. The team has the following players: International Master Rodwell Makoto who is based in South Africa, Emerald Mushore the current National Champion, Jemba Zhemusse former National Champion and Elisha Thabo for the men’s team. The ladies will
be led by Colleta Wakuruwarehwa, Nomalungelo Mathe, Women Candidate Masters Kudzai Charinda, Christine Makwena and Paidaishe Zengeni.

The officials making the trip to Batumi are Clive Mpambela, International Arbiter Simbarashe Murimi, Fide Instructor Elton Mhangarayi and National Instructor Fungirirayini Chiweshenee Mushaninga. The team departs in two weeks time for this most prestigious chess extravaganza which will feature the world’s most fine chess players including the World Champion Magnus Carlsen of Norway. The United States of America is out to defend the title which they won in Azerbaijan two years ago.

Fabiano Caruana, Wesley So, Hikaru Nakamura, all eyes will be on these Super Grand Masters as they will be out to annihilate their opponents with their scintillating combinations which saw them win the previous edition of the Chess Olympiads. However not to be outdone will be Russia, China, and Armenia. Levon Aronian will be out to prove a point with his team. The best team will carry the day as well as the gold medals like the last edition of the championships. This is like the Fifa soccer world cup. We hope for the best. In Africa, Egypt will be out to defend its pole position with players like Grandmaster Ahmed Basseem, International Master Fawzy Adam to name just a few players who are known in the chess circles in Africa as the best.

South Africa will also be boasting of their Grand Master Kenny Solomon, IM Watu Kobese, IM Mabusela, IM Henry Steel these will be out to defend the pride of the rainbow nation. Zambia will be led by the AK-47 IM Andrew Kayonde, FM Douglas Munenga. CM Simutowe, CM, Daniel Mulenga and Kela Siame Kaulule will lead the Zambians in their quest to be the best African country in chess.

Morocco, Algeria, Namibia, Botswana, and Mozambique will as be there. Not forgetting the Angolans who also have International Master David Silva. They can produce some magic in this tournament. The tournament will be full of surprises and these upsets will not go down unnoticed. There will be some very pulsating stories from this chess fiesta.