The National Association of Non-Governmental Organizations (NANGO) joins the rest of the world in commemorating the International Day of Peace and appeals to all people in Zimbabwe to commit to peace and fostering a culture of human rights post the 2018 general elections. 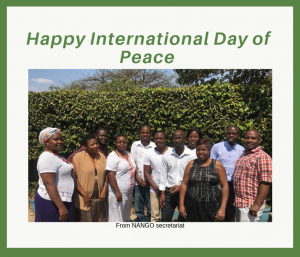 Commemorated every year on 21 September, the International Day of Peace is a day set aside for all humanity to commit to peace above all differences and to contribute to building a culture of peace. This year’s theme is “The right to peace – The Universal Declaration of Human Rights at 70”.

Regrettably, in Zimbabwe, International Day of Peace is being observed at a time when there is a cholera outbreak, violent clashes between vendors and security forces and barely two months after lives were lost due to post election politically motivated violence.

It is pertinent to appreciate that tolerance of differing opinions is a crucial aspect of democracy and any violent actions will further limit the right of people to exercise their constitutionally protected freedoms of assembly, expression and association, which are guaranteed under the Bill of Rights.

While the Universal Declaration of Human Rights provides for and asserts that, ‘Human rights are everyone’s rights’, it is worrying that some crucial mandates such as Article 25,that reads, ‘Everyone has the right to a standard of living adequate for the health and well-being of himself and of his family, including food, clothing, housing and medical care and necessary social services, and the right to security in the event of unemployment, sickness, disability, widowhood, old age or other lack of livelihood in circumstances beyond his control is not yet a reality in Zimbabwe 70 years after the adoption of the charter.

NANGO hereby calls for support from all citizens for the seven-member Commission of Inquiry set up to investigate the post-election violence of August 1 2018. NANGO also stands by peaceful resolution of conflict along Sustainable Development Goal 16 on Peace, Justice and Strong Institutions.

NANGO is a non-party political, non-profit making organisation and non-denominational official coordinating body of NGOs in Zimbabwe with a membership compliment of over a thousand organisations. It carries under its wings an amalgam of various issue constituencies and representative groups all with the singular focus of meeting the development needs of men, women and children in Zimbabwe.