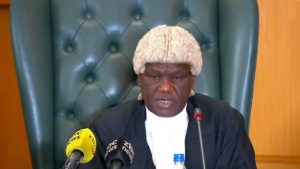 Some MPs resorted to unpleasant heckling as Chief Justice Luke Malaba and Justice Priscilla Chigumba were fulfilling their constitutional duties – the Chief Justice administering the necessary oaths of loyalty to the newly-elected Speaker and Deputy Speaker, and Justice Chigumba, in her capacity as chairperson of the Zimbabwe Electoral Commission, because the proceedings for the election of both presiding officers have to be conducted under the supervision of her Commission [Constitution, sections 126 and 127].

However great their disappointment with the 30th July presidential election outcome, It was inappropriate and regrettable for the MPs concerned to express it in the way they did.  The Constitution, its institutions and officers should be respected.

On behalf of Parliament of Zimbabwe and, indeed, on my own behalf I would like to publiclyapologise unreservedly to the Chief Justice, His Lordship Hon. Luke Malaba, and the Chairperson of the Zimbabwe Electoral Commission, Justice Priscilla Chigumba, for the indecorous behaviour by some members of the National Assembly during the swearing in ceremony of presiding officers yesterday.

The Chief Justice is the Head of the third arm of the State and should be accorded the respect due to his office and, indeed, the entire judiciary.  The behaviour was uncalled for and should becondemned in the strongest possible terms.  Let me remind those members who displayed such deplorable conduct that section 119 of our Constitution provides that:

“(1) Parliament must protect this Constitution and promote democratic governance in Zimbabwe.

(2) Parliament has power to ensure that the provisions of this Constitution are upheld and that the State and all institutions and agencies of Government at every level[including Parliament] act constitutionally and in the national interest.”

Hence Parliament in its diversity must be at the forefront of protecting the Constitution by respecting the dignity of our State institutions.

It is in this context, therefore, that I convey my sincere apologies to the Chief Justice and Justice Chigumba for the shameless attacks on their character and person in the course of their constitutional duties.  It is my expectation that such unbecoming behaviour will not be repeated in the House whose lofty stature must be guarded jealously at all times.

(SPEAKER OF THE NATIONAL ASSEMBLY)