A row over a new roundabout shows the deep political divide persists in Zimbabwe, two months after disputed polls. 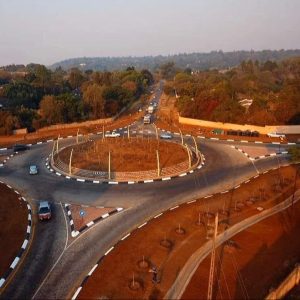 The roundabout on Harare Drive – the road that rings the capital – has captured public attention because of its interesting features, including blue floodlights that light up its centre at night, and the fact that it represents a positive development after years of neglect under former president Robert Mugabe.

But in a statement ex-Harare mayor Bernard Manyenyeni confirmed the City of Harare “paid 100%” for its construction.

Writing on Twitter, MDC MP Chalton Hwende added: “The contractor who was involved in the construction of the roundabout on Thursday sent his invoice to the City of Harare. The invoice is there for everyone to see.”

As political parties haggled for proximity to this development, others found the whole thing rather bemusing in the light of Zimbabwe’s economic problems and recent cholera crisis.

“That this is actually viewed as development should worry us as citizens,” tweeted @ManasaNjanike. “We are setting very low expectations and the bar is literally on the floor.”

@hwende Mhofu Hwende I guess you are spending too much time with Chamisa. Read that sign, it clearly says GOVT OF ZIM Zinara! pic.twitter.com/0hCvOvQpEw

After so much noise the ex Mayor @BenManyenyeni has clarified that the roundabout was 100% funded by the City of Harare I hope this settles the matter.Zanu-PF must concentrate on solving the fuel crisis instead of claiming credit for roundabouts @matigary @Mavhure @nelsonchamisa pic.twitter.com/Eo5MgZmgDj