Today president Chamisa visited the cholera affected area of Glen View where he interacted with the affected community members and families. His first port of call was the Glen View Clinic before proceeding to the sewage works where he noted with disgust the appalling state the of the infrastructure. 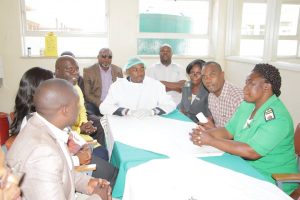 The President got a firsthand witness of the dire situation in Glen View and called on all council authorities across the country to raise their alertness and urgently come up with mitigatory measures to curb the scourge.

Among some of the urgent measures proffered by the President were for all councils to establish disaster mitigation committees, rolling out public health education, intensifying refuse collection and repairing of all burst sewer and water pipes in residential areas. He implored local authorities to move swiftly in attending to these issues

He stressed that local authorities are an essential component of a functional state adding that the MDC will place Zimbabweans at the center of service delivery. The President’s call resonated with the MDC SMART policy pledge.

The people’s President lamented the state of all Zimbabwe’s cities and towns which he said were in a state of decay characterized by collapsed infrastructure, overcrowding, slums and other forms of informal settlements. President Chamisa took the opportunity to reiterate the MDC plan on devolution revolution which will be anchored on the development of SMART cities.

President Chamisa reminded all the elected representatives in local authorities to represent the interest of the people in their areas of jurisdiction and warned against complacency and dereliction of duty saying MDC will not tolerate incompetence and mediocre by office bearers.

Meanwhile the MDC Secretary of local government Mr Sessel Zvidzai convened an urgent meeting of the MDC local government committee at Morgan Tsvangirai House which was attended by all Mayors of the greater Harare comprising Chitungwiza, Norton, Harare and Ruwa and their respective resident associations to urgently craft a roll out programme of health intervention mechanisms for residents to mitigate the spread of cholera. The meeting resolved to activate all civil protection agencies to prevent mitigate and cure the spread of cholera. The Mayors and resident associations were urged to work round the clock at this time of need.