Egypt is Africa's third-largest economy, famous for the pyramids … and lengthy black-outs. A new plant fired by imported coal will change that. And the way may be open for supplies from Matabeleland. 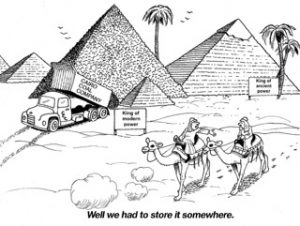 Asking someone outside Zimbabwe to find Matetsi or Penhalonga on a map can be challenging.

But we’re not alone, and when the Egyptian government announced tenders for a power plant at Hamrawein, no surprise that few potential bidders knew where it was.

This small port on the Red Sea, 600 kilometres south-east of Cairo, has been little more than a dot on the map where ships sail past on their way to Suez.

But all that will change over the next six years as Egypt builds the world’s largest clean-coal plant.

A Chinese conglomerate beat the US General Electric and a Japanese firm for a $4.4bn project at Hamrawein that will generate close to seven gigawatts of power or 40 per cent more than South Africa’s new station at Medupi, and dwarfing output from the turbines on the Zambezi River at Lake Kariba.

“This will be the world’s most advanced ultra-supercritical clean-coal plant,” said Zou Lei who chairs the Dongfang Electric Corporation, one of the winning contractors. Chinese and Egyptian banks will provide the finance.

China, the United States and South Africa lead the world in clean-coal research, though many sites still use old-fashioned technology. Critics say this is made worse by a World Bank decision not to fund projects using fossil fuel.

Egypt’s notorious power black-outs were among a list of grievances when, in 2011, crowds on Cairo’s Tahrir Square forced president Hosni Mubarak from power in one of several revolts known as the Arab Spring.

But the new government was unable to lift the output of kilowatts, and outages continued until, in 2014, parliament voted to overturn a ban on importing coal and, two years later, changed the law to allow coal-fired electricity.

Within months, the government announced plans for the plant at Hamrawein and invited tenders.

Use of coal is rising across the Middle East, with new generators planned for Turkey, Israel, Iran and Jordan.

Dubai is building a 3.6 gigawatt ultra-supercritical plant as part of its plan to reduce emissions between now and 2050.  Poland has a similar program.

But there’s a problem for the government in Cairo: Egypt has very little coal.

Ironically, a solution for Hamrawein was modeled on China’s great rival, Taiwan, which currently has the world’s largest clean-coal generator, but imports the fuel.

While Egypt develops its own mines, coal will be imported from South Africa and Indonesia, but the door is open for Zimbabwe with extensive mines south of Victoria Falls, though Tanzania, Kenya and Botswana will also be in the running.

Tanzania has its own coal-powered generator near the Mozambique border while Kenya is building one near Lamu on the coast. Bangladesh, the Philippines and India are growing their capacity.

In Johannesburg, Prof. Rosemary Falcon who leads research at Wits University, said Hamrawein would be the perfect place to show how clean coal can help achieve the goal of lower emissions under the Paris Accord.

“A country like Egypt, with nearly 100-million people, needs a lot of base-load power that doesn’t go off,” Prof. Falcon said. “Wind and solar are fine, but they only work when the wind blows or the sun shines. And you need vast areas of land to house them.”

Coal, she said, had been a problem in the past because of pollution. “Those days are thankfully behind us with the new clean technology. We can now burn it with close to zero emission and I look forward to following the project in Egypt.”

In Africa, an estimated 600m people are not linked to the grid, but Kenya, Botswana and Namibia have lifted connection rates over the past decade while, since 1994, South Africa has achieved close to 100 per cent access.

For centuries, locals in Hamrawein have watched the boats sailing past their town. Now ships will bring coal into port and more than 5000 jobs will be created in building the generators over a period of six years.

Life will be changed forever, but Prof. Falcon says Hamrawein is just the beginning.

“Coal is by far the cheapest and most secure way to create a reliable supply of current,” she said. “And Egyptians have as much right to electricity as anyone else.

“This is something many in the developed world take for granted and, if there’s a sadness, it’s that turning on the lights across Africa has taken so long.”