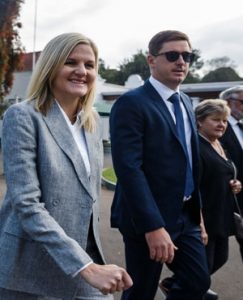 The seven times Olympic medalist, was among 20 new cabinet ministers who were sworn-in during a public ceremony attended by their families and senior government officials on Monday, reported the state owned Herald newspaper.

Mnangagwa delighted many Zimbabweans by naming the former Olympic champion swimmer as one of his ministers.

Coventry, who is also the current member of the International Olympic Committee (IOC) executive board, tweeted on Monday after the swearing-in ceremony, saying that that she felt honoured to serve as her country’s new youth, sport, arts and recreation minister.

Coventry said she would “continue to carry our flag with pride and dedication of service so we can come together and take Zimbabwe forward”.

In a video posted on YouTube by 263Chat, she said that she hoped to sit down with the country’s sports fraternity and work out how her ministry would assist in making the country move forward.

Watch her speak in the video below

Coventry said that heading the ministry was an exciting opportunity as it would assist in “empowering the youth through sport, arts, and recreation”.

Coventry is the most decorated Olympian from Africa, who won gold medals in the 200-metre backstroke at the 2004 and 2008 Olympics and also has four silvers and a bronze, the most Olympic medals by an African athlete, reported the Pulse.

She shares the record of most individual medals by a female swimmer at the Olympics with Krisztina Egerszegi of Hungary.

I am honoured to be appointed by President Mnangagwa as Zimbabwe’s Minister of Youth, Sports, Art and Recreation. I will continue to carry our Flag with pride and dedication of service so we can come together and take Zimbabwe forward.