A ZIMBABWEAN court on Friday 20 September 2018 ended the two-day detention of Conrad Gweru, a freelance journalist, who was arrested and charged with disorderly conduct for allegedly taking photographs of Zimbabwe Republic Police (ZRP) officers. 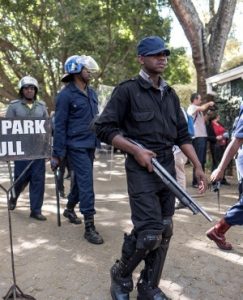 Gweru was arrested on Wednesday 26 September 2018 by ZRP officers and
charged with disorderly conduct as defined in section 41 of the
Criminal Law (Codification and Reform) Act Chapter 9:23.

Prosecutors claimed that Gweru unlawfully and intentionally engaged
in a disordelrly conduct by taking pictures and shouted at a ZRP
officer identified as Victor Mawodzwa while protesting against the
misconduct exhibited by ZRP officers at an accident scene involving a
commuter omnibus, with the intention of provoking a breach of peace.

Harare Magistrate Edwin Marecha, who granted Gweru $30 bail and
remanded him out of custody to 25 October 2018, ordered him to
continue residing at his given residential address and not to
interfere with witnesses.