‘Electric car causes stir in fuel-starved Zimbabwe’ read the headline today on News 24. We can understand why the sight prompted interest given the return of long queues for fuel. 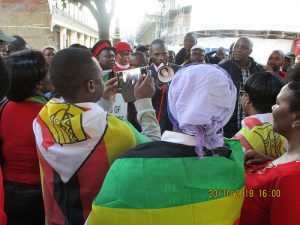 But then reality kicked in. What about the difficulty recharging the car when electricity supplies are so erratic? Perhaps that was why the car was seen on the back of a recovery vehicle, thought the cynics. At least it wasn’t another $3 million Bugati seen being unloaded at Robert Mugabe International a few weeks ago.

Cynicism now reigns in Zimbabwe. Few now trust what they are told by the authorities. Even Zanu PF is increasingly rejecting the fantasy world bequeathed by ‘son of God’ Mugabe.

Deputy Information Minister Energy Mutode recognizes the problem: ‘This is an economy that is dealing with a legacy of . . . Mugabe. We are now in a new dispensation . . . so there are a number of economic issues we need to correct . . . Zimbabwe very much needs to access multi-lateral funding for its debt and if that doesn’t happen we will be in crisis.’ (See: https://www.theguardian.com/world/2018/oct/19/zimbabwe-needs-aid-to-prevent-further-crisis-warns-ruling-party.)

Everyone experiences this on the streets. The value of bond notes has collapsed, as the Vigil predicted it would when they were introduced two years ago. Our diary of 26th November 2016 noted ‘because Zimbabweans have lived through this asset stripping before, they know exactly what to expect. Savings will be wiped out by rapidly depreciating Mickey Mouse money for the benefit of the elite which will externalize all remaining US dollars in the country’.

Now we hear that people suspected of externalizing funds are not being taken to court because the national prosecution authority does not yet have a substantive Prosecutor-General in office. A lawyer commented: ‘Economic crime is rife in Zimbabwe but there is no political will to deal with it (see: https://bulawayo24.com/index-id-news-sc-national-byo-147681.html).

The new Finance Minister Ncube realizes what’s happened and has announced the scrapping of the vaunted farm mechanization programme introduced by Mugabe in 2007. It was, he said, ‘riddled with corruption.’ A number of unnamed members of the political elite were said to have given themselves irrigation equipment, brand new tractors, combine harvesters and other farming materials. The loans were never paid back and the government had to write off more that $200 million. Mr Ncube’s decision came despite the government’s farming policy being championed by Vice President Chiwenga who said Zimbabwe could again become Africa’s bread basket.

This Zimbabwean delusion is scrutinised in an article by Michelle D Gavin, senior fellow for Africa Studies at the US Council on Foreign Relations. She says: ‘State media trumpets headlines about breakthroughs with the international financial institutions or new investments from abroad, but closer inspection tends to reveal far less than meets the eye. When creditors agree to a payment plan to clear longstanding debts, it doesn’t mean that new loans are coming, or even that arrears will actually get cleared. When start-up hedge funds commit to try to raise capital for unspecified projects in the future, it doesn’t mean that an influx of dollars has been secured. In their quest to paint a picture of a new dawn, Zimbabwean officials keep overselling small and preliminary steps, undermining their own credibility’ (see: https://www.cfr.org/blog/zimbabwes-falling-expectations).

The failure of the government to follow up on its promises, for instance in implementing the electoral reforms required by the constitution, has not gone unnoticed abroad. Those international electoral observers that matter were less than enthusiastic about the elections and even the others were shocked by the army’s shootings in Harare. The upshot is that Zimbabwe is not seen as ‘open for business’. A touted investment conference has been postponed for a year and prospects of being invited to rejoin the Commonwealth have dimmed according to Sue Onslow, Deputy Director of the Institute of Commonwealth Studies.

People have been disillusioned by the Mugabe fantasies: now they are increasing becoming cynical about the promises of the Mnangagwa regime.

FOR THE RECORD: 43 signed the register but there were many more than that present.