It is about time we stopped blaming our government, Mugabe and now ED for the appalling woes we suffer in Zimbabwe. Because while we keep doing that, we will never address the real cause of our dreadful poverty, disease, starvation, dictatorial oppression, and a terminal economy. 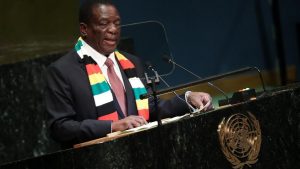 The fact of the matter is that it is NOT our government’s fault it is corrupt and oppressive. And that is because our government is only behaving in the way ALL governments will sooner or later behave if their citizens do not stand up to them!

So if ALL governments will behave like that given the chance, why are we expecting our government to behave any differently? When we stop blaming the government and start blaming ourselves, then we will rapidly create the Zimbabwe we want.

For the same reason, nor should we blame anyone else. Apart from the government, it is easy to blame ZEC, our opposition politicians, the electoral system, the international community, the AU, SADC, the military and anyone else you can think of.

We Zimbabweans tend to think our situation is peculiar to us. It is not. First, all Africa’s other 53 nations are in a similar position, some better than us, but some worse off than we are.

Second, the citizens of virtually every nation in the world have at some time in their history suffered from oppression and extreme poverty as bad as in Zimbabwe now. Many of us will find this hard to believe because we think White Westerners have always been wealthy, but even they used to be in extreme poverty just as we are now, living in slums and hovels, with no clean water or sanitation, with many of them starving and open to disease just like us. And their governments were just as corrupt and brutal as ours is now.

So how did they escape their poverty, and get the wealthy lifestyles they have now? A time came when the citizens themselves realised their governments were never, ever, going to help them escape poverty and help them to become wealthy. And they realised that if they did not stand up for themselves, they would stay oppressed and in poverty for ever. They had finally realised something very important:

‘IF WE DO NOT STAND UP FOR OURSELVES, OTHER PEOPLE WILL STAND ON US’

All of us need to make this our motto because it is exactly what we have allowed to happen to us ever since Independence. And the vital lesson we must all learn is this: EVERY time the people of a nation have used their citizen-power PROPERLY, they have freed themselves and climbed into prosperity. But every time they have NOT used their citizen-power – or did not use it properly – they have stayed oppressed and poor.

Please note the word ‘properly’. There have been many citizen-movements in Africa but so far all of them have failed because they were not properly run. In fact, Africa has never had a successful citizens’ movement because over 90% of Africans are still in extreme poverty, and the vast majority are still ruled by corrupt, often oppressive governments.

Now you know why we are still oppressed and in poverty! In other words, If we want freedom and prosperity, we ourselves must stand together against our government to make it happen. But we must also do it in the right way.

There is only one flaw here: citizens need the right leaders. For most of our 38 years, we have been relying on elections and our opposition political parties to give us the two things we wanted most from Independence: genuinely free democratic government, and prosperity for all. However, that is a delusion because elections and political opposition parties DO NOT WORK against corrupt or oppressive governments like ours. They only work in genuinely free democracies, as we in Zimbabwe have discovered time and time again.

So if it is true that elections and opposition political parties will not lead us out of this mess, who can we look to?

The answer is our activists, in which we include our campaign groups and civil society organisations.

Zimbabwe is not short of activists – there are more than enough to change Zimbabwe. So that is not the problem. The problem is that few of them know what to do – but that is not their fault. After the end of colonialism, without even asking us, Western governments (through the UN, World Bank and IMF) highjacked the task of eradicating poverty in Africa, and have insisted on dominating it ever since. This meant they had taken on the responsibility for showing us how to get the governments we want. So the real blame lies with them. And the fact is that Western governments know exactly how to get rid of corrupt, oppressive governments like ours, because only they have actual experience of doing so.

So they should have taught us elections do not work against corrupt, oppressive governments, and if we really want to change a nation overnight, then properly organised citizen-power is the ONLY way.

And if the West had taught our activists this when Mugabe’s actions became apparent, Zimbabweans would have been living in a free democracy for many years by now, and would by now be living in prosperity.

The West’s failure to guide us is desperately sad because, as a result, many of our activists have been totally unnecessarily murdered, tortured, dispossessed, raped or forced to flee Zimbabwe, and their families have suffered enormously.

Because we have not been taught otherwise, most of us activists believe we are doing some good by writing articles, putting comments on social media, making speeches or having discussions complaining about the government or telling it what it should be doing. But let’s face it, that is what we have been doing for 38 years, and it has achieved nothing!

What we must all understand is that our government’s agenda is not the same as ours. In fact, far from doing anything wrong, it has done a remarkably good job and been very, very effective at doing what it set out to do, which is to keep power and enrich itself at the expense of its own citizens and of Zimbabwe itself. So to criticise it for doing the very thing it intended to do will get us nowhere.

Anyway, do you think our government cares at all what we think? No it does not, and as a result the efforts of ALL us activists for the last 38 years has been no more than trying to stick a pin in an elephant’s hide. The elephant does not even notice, and we will never achieve anything in that way.

In fact, the government actually wants us to keep attacking it verbally because, while we are wasting valuable time and energy on that, it means we are not concentrating on the one and only thing it fears—helping to mobilise our citizenry.

Because there is only ONE thing corrupt, oppressive governments like ours fear: a well-organised citizenry acting in unison against them.

And the sooner we learn that, the better. So that is what you must give 100% of your time and effort to achieving. In other words, Our job is NOT to change our government, it is to change our citizens!