We have some hard lessons to learn after the last few months. Let's start with a story. 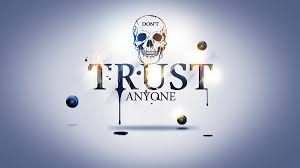 Jake started out vending on the street but worked hard, was intelligent and lucky and eventually had his own very successful shop.

The time came when he started thinking of training his little son (I’ll call him Joey) to eventually take over the business from him. His first lesson was about business management.

Jacob said to Joey:”It’s time to learn about business. Do you trust your Dad?” “Yes Baba, of course I do” replied Joey. “Good, so climb up on that high shelf; I tell you it is safe.” With some hesitation and a bit of help from his father, the little guy got there. Then came the test. Jake said “Now jump down. It’s OK, I’m here to catch you.” Joey looked down and hesitated. “What’s wrong? Don’t you trust Baba?” So Joey jumped. Jake stepped back and Joey ended up spread out on the floor. Rubbing his bruises he asked “Why did you do that?” Jake replied:”First lesson in business; don’t never trust nobody.”

And we all know he was right. Good business practice is full of rules to keep and papers to sign because if you trust people, you end by being robbed. What is true in business is even truer about politics. Assume that anyone who wants power will misuse it and you can’t go far wrong. But in real life we can’t do everything for ourselves. We have to get together and that means some people have power over others. That’s why we have constitutions; laws are made to regulate all of us, constitutions are made to regulate our rulers. Both of these are meant to be for our safety and freedom. Just as in a sensible country, laws regulate who may own a gun and how they may use it; for example, if they let the police carry guns, laws should govern when they may carry guns and restrict very carefully how and when they use them. A Constitution is meant to protect us by reminding the people in power of the limits of their power. That is why we must limit how long a president can be in office, provide checks on his power, make sure judges are independent and to make strong rules about what presents powerful people are allowed to accept – lots of stuff like that.

That is not enough; however good a constitution is, people will find ways round it. We need to watch our rulers carefully to spot where the weak points in our constitution develop and amend it before some smart chef takes advantage of it.

On the other hand, amending it should be a serious matter, something not easily done because the results might not be easily undone. Amending the constitution to keep an old man in power or to keep a younger one out is asking for trouble. Letting a 2/3 majority in parliament or a simple majority of voters decide such important issues is irresponsible. We all know you can fool all the people some of the time or some of the people all the time, but you can’t fool all the people all the time. We must ponder the meaning of that. Letting 51% decide in a one-off vote leads to situations like the British problem over membership of the EU; a repeat referendum would most likely reverse the first one, but that is less easy to arrange.

One could write volumes of detail, but details change with circumstances; keep a few principles in mind and be prepared to discover after twenty years that somebody has found a way round what originally promoted your principle. A few simple principles are:

There is much more to say another day.