Harare City’s Mbare national rank is ironically feared by many because of harassment and ambush by night muggers, who are mostly disguised as touts. Many travelers try to avoid it by all means especially when travelling at night. 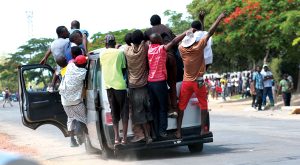 Despite operating normally like any rank in Harare during day time, the scenario is quite different at night. Goons pretending to be regular ‘touts’ seek customers for different destinations, as explained by Ken Gono, who once fell a victim while heading to Chivhu.

“I can never forget what I experienced towards the station. One whindi approached me, while still very far from the stage. Within a few minutes, another one joined and soon it was a group around me. They then proceeded to making chaos, one whindi trying to take my luggage and another trying to pull me towards what he said was a cheaper bus while another tries to convince me to go to a bus that is almost full. In the ensuing confusion, I lost my bag and personal effects,” he narrated to The Zimbabwean.

He added, “Imagine a whindi can track a customer from a far distance with incessant inquisitions on where he or she is going. Those appearing to be heading upcountry are spotted before entering the actual bus station. Possession of a bag or other belonging is a sure way of depicting one as a potential customer.

They would be in the forefront to direct you as if you never know your destination.” This is a typical night at Mbare national rank station. It appears that the thugs are not even afraid of the cops whose base is just adjacent to the bus station.

Pastor David Ngorima also encountered this scenario at the same venue only a week ago when his phone and other personal effects were stolen from him while escorting a relative to the bus station using his private car. Upon reaching the station, he stopped to offload the customer’s luggage from the boot. He did not close the window since he did not suspect anything.

However, when he was through with offloading, he was astonished to find out that his expensive phone which was charging at the driver’s seat was missing; only the charger was left. This is when he remembered that some people had ambushed him telling him to offload faster since personal cars were not allowed at the venue.

“I was shocked. All my valuables had gone just like that, save for the phone charger, “he told The Zimbabwean. According to him, it is not logical that the place is exceedingly insecure while the police are a stone-throw away. “The police must be colluding with these thugs, there is no way this harassment and theft can be going on while the police are doing nothing about it,” he observes.

Steven Gandari, a trader at this place confirms that many customers have either lost their luggage or boarded wrong buses. “Here, such complaints are many” he notes. “You will hear someone has boarded and even paid for a bus after being dubbed that it is heading to his or her location only to find out that they’re in a wrong route,” he said, adding that, “However, when such passengers request for refund, a confrontation with the conductor sues.”

Albert Matakanure, a driver at Gushungo bus service says that “We have been receiving frequent complaints of harassment and theft of travelers. However, things get difficult since most of the time; the culprits are unknown and disappear after committing the crime.”

He urges all those operating in the area to be co-operative in fishing out the criminal elements from the area. “Hiding them or failing to disclose the criminals make problems hard to solve” he added.

He further says that police have been reluctant in maintaining security considering that they are just within the bus station. “Their reluctance has motivated these criminals who operate without fear of being arrested.”

When reached for a comment, Mbare police station officer refused to make a statement at his capacity. “But I cannot say anything about it without the permission of my boss. He is the one who should communicate such information,” he told The Zimbabwean.