A victim of police brutality 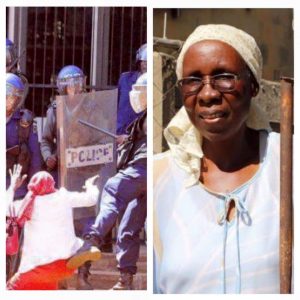 A ZIMBABWEAN court has ordered the Zimbabwe Republic Police (ZRP) and Home Affairs and
Cultural Heritage Minister to pay more than $13 000 in damages to 64 year-old Gogo Lillian
Chinyerere as compensation for the pain she suffered in 2016 after some ZRP officers assaulted her
during an anti-government protest.

High Court Judge Justice Nicholas Mathonsi recently granted an order compelling ZRP
Commissioner-General Godwin Matanga and Home Affairs and Cultural Heritage Minister Cain
Mathema to pay $13 500 in damages to Gogo Chinyerere for the pain and suffering she endured
emanating from the assault and some injuries she sustained on 26 August 2016, when some armed riot
police officers kicked her repeatedly with booted feet and struck her several times with truncheons,
while sitting near a courthouse in Harare.

According to summons filed in the High Court by her lawyers Kudzayi Kadzere and David Hofisi of
Zimbabwe Lawyers for Human Rights, Gogo Chinyerere, who suffers from high blood pressure and is
diabetic, suffered the ignominy of a brutal assault on her aging body in full view of the public and also suffered physical harm as well as harm to her dignity as she was humiliated in full view of the public.

The 64 year-old Gogo Chinyerere suffered injuries to her back and shoulder and was unable to proceed
with her job as a tailor due to the injuries sustained and has since been relying on well-wishers for her sustenance.

In court, Matanga and Mathema, who were represented by lawyers from the Civil Division of the
Attorney General’s Office, had denied the allegations levelled against ZRP officers and claimed that she had made the assault allegations in a bid to tarnish the image of ZRP.

But Justice Mathonsi ordered Matanga and Mathema to pay $13 500 to Gogo Chinyerere broken down
as $5 000 for damages for pain and suffering, $5 000 being damages for contumelia (indignity), $2 500
being special damages for loss of income and $1 000 as damages for past and future medical
expenses.