Finance Minister Mthuli Ncube is a fraud,he has removed all doubt by his decision to give Acie Lumumba a treasury job. Lumumba is being rewarded for peddling pedestrian propaganda while expressing a vote of no confidence in Nick Mangwana who is so desperate to fill the George Charamba smelly shoes. 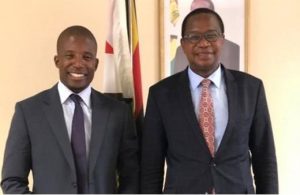 The MDC condemns the jobs for the boys approach adopted by Zanu PF.

We are not only concerned by the move to appoint Lumumba but the net effect of creating a parallel structure in government. It sets a wrong precedent. It is also an issue of paying many people for doing the same thing on tax payer’s money.

The appointment of Lumumba follows several other questionable appointments including that of David Mnangagwa to the NSSA board, Nick Mangwana as permanent secretary and the shock appointment of controversial socialite Ginimbi to the post of ZTA brand ambassador.

Lumumba is a questionable character who even bragged of abusing funds on radio including on SABC.

He is therefore not fit to be near treasury even as a sweeper. He also lacks the competency and is too arrogant and partisan to be a government communicator. Even if it was a different person, the Minister ought to have followed due procedure.

If the government wishes to hire a consultant there must be advertisements flighted in newspapers of national circulation. The best bid must be selected on merit which includes consulting integrity, experience and traceable references.

The same should apply to employment of individuals in public service.

Ironically, Saviour Kasukuwere is on trial for awarding consultancy work to George Manyere without going to tender, the law must be applied similarly in this case. When a Minister, who is supposed to lift the country from a position of lack of trust and confidence sets this wrong precedence, it creates problems and complicates recovery.

It is however not surprising that Ncube made this pick for he sees himself in Lumumba.

We mentioned in our previous statements about his global scandal which resulted in the arrest of his superiors weeks after he had left the job. We also view the investment in propaganda machinery at the Ministry of finance as misdirected and a waste of tax payers’ resource.

Focus on economic revival, the citizens will see the results. The state has enough communication outlets and personnel.