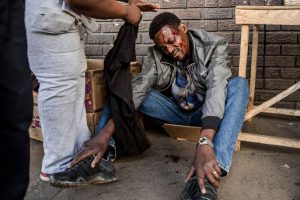 The Zimbabwe Human Rights NGO Forum (Human Rights Forum), representing civil society organisations (CSOs) in Zimbabwe, welcomes this opportunity to address the African Commission on Human and Peoples’ Rights (the Commission) on this occasion of its 63rd Ordinary Session.

Honorable Chairperson, Zimbabwe held its historic plebiscite on the 30th of July, 2018. Historic in that, this was the first election since 1980, without former President Robert Mugabe as the ZANU–PF Presidential candidate and also without the late Morgan Tsvangirai as the opposition MDC presidential candidate. Similar to previous elections (the 2008 and the 2013 in particular), the administration and results of the elections were disputed. Zimbabwe, as a signatory to the African Charter on Democracy, Elections and Governance should uphold the principles enshrined in the Charter.

Honorable Chairperson, on 1 August 2018, the military intervened to quell the demonstration by citizens over the perceived delay in the announcement of the Presidential results. The military intervention resulted in the extra-judicial killing of at least seven (7) civilians in Harare. The aftermath has also witnessed retributive attacks on those who had served as election agents for the opposition. Reports of such violence were recorded in the Mashonaland, Masvingo, Manicaland and the Midlands provinces. A total of 274 cases of post-election human rights violations were documented.[1] The security services in particular the Zimbabwe National Army accounted for 37% of the violence.[2]

Honorable Chairperson, we acknowledge the appointment of the Commission of Inquiry to investigate the shooting of civilians on the 1st of August, 2018, although we have reservations on the composition of the Commission as some the members have openly declared their allegiance to the ruling party. It is our hope that the Commission will not be influenced by political persuasions and will maintain the values of independence, truth and accountability.

Honorable Chairperson, the social, economic and political situation in Zimbabwe continues on a downward trend, with the ordinary citizens at the receiving end of the debilitating effects. The Minister of Finance in his recent fiscal policy statement acknowledged the economic challenges facing the country.[3]The deplorable socio – economic situation has augmented high unemployment rates and a decline in the provision of basic social services. Prices of basic commodities have skyrocketed coupled with the scarcity of basic commodities and essential drugs, threatening the rights to food, water and healthcare. The growing dissatisfaction with the socio-economic situation presents a risk of public protests  and violence as was the case with the 1998 food riots and 2008. This situation is exacerbated by the  lack of transparency by the government especially in designing economic programmes.  These challenges raise a red flag of non-accountability regarding the government’s economic management and creates a real risk of grand corruption where people’s savings are looted in a manner that violates the law and the basic tenets and morals of transparency.

As the economic meltdown persists, the government has accelerated its clampdown on informal traders who found a respite in the failed economy. The government continues to disregard the enjoyment of fundamental freedoms such as freedoms of assembly and association, freedom to demonstrate and petition and freedom of expression and of the media as enshrined in sections 58, 59 and 61 of the Constitution respectively. On the 11th of October 42 ZCTU members were arrested country wide in a bid to stop them from proceeding with their peaceful protest against government’s disastrous fiscal and monetary policies. Journalists continue to be assaulted and arrested during the scope of their employment. MISA- Zimbabwe documented a total of 15 cases of violation of freedom of the media. As civil society, we are concerned and outraged with the excessive use of force by the police in dealing with vendors. Running battles involving the police, municipal police and vendors and the indiscriminate assaulting of citizens by the police is now the order of the day, particularly in Harare’s CBD.

Honourable Chairperson, as I am presenting this statement, Zimbabwe is currently battling a cholera outbreak, a preventable, treatable and manageable disease that has so far claimed approximately 54 lives and infected 8 831 people as of 07 October 2018.[4] What is more worrisome is that the main cause of the outbreak is a poor and old sanitary system in the country, lack of access to clean, safe and portable water. This is a clear demonstration of the government’s lack of commitment to provide basic rights and services. The Constitution places an obligation on the State to guarantee the rights of persons to a clean environment (Sec.73), the right to health care (Sec.76) and the right to safe, clean and portable water (Sec.77 (a). These rights are also safeguarded in the African Charter on Human and Peoples’ Rights, to which Zimbabwe is a party. We urge the government to fund the health sector in line with the Abuja Declaration that stipulates that at least 15% of the national budget should go to public health care funding. The current set-up where healthcare funding is inadequate has resulted in an overreliance on out-of-pocket and external financing which are highly unsustainable and deplorable, to say the least. It leaves Public Health institutions at the mercy of well-wishers. The Ministry of Finance has to beg for donations to contain preventable diseases such as cholera, going as far as calling for crowd funding among the already impoverished populace.

Honorable Chairperson, we remain concerned by the violation of civil and political rights taking place with no sign of abating.  From the last session, we documented a total of 1212 cases related to civil and political rights of these, 20were of torture, 21 were of abduction[5] 145 were of assault, 656 were of harassment and intimidation[6] 15 were of violation of freedom of expression and of the media[7], amongst other violations. Fundamental rights of freedoms of expression, assembly and association, the right to demonstrate and petition continue to be violated by the government which has maintained repressive legislation on her statute books in spite of calls by CSOs to realign all domestic laws with the Constitution.

Honourable Chairperson, we note with concern, the State’s non- compliance with gender equality and equal representation as provided for by sections 17 and 56 of the Constitution. In spite of signing and ratifying regional and international conventions that advance gender equality and women’s rights, Zimbabwe continues to lag behind in implementing the 50% quota system to ensure upholding gender balance. Women’s representation in key decision-making institutions such as parliament, local government and cabinet is far below the 50%.[8]  This is exacerbated by a lack of legislation to compel political parties to comply with constitutional provisions and to ensure implementation of the parity principle in drawing up party lists creates a gap for promotion and of equal access to leadership and decision making by women.

We therefore appeal to the Commission to urge the Government of Zimbabwe to: