Zimbabwe is a crazy place to live in, but at times like these we need to keep our perspective. Fuel queues, empty shelves, the constant stream of social media messages complaining about everything and claiming that tomorrow is Armageddon. Sometimes you simply have to get away from it all. 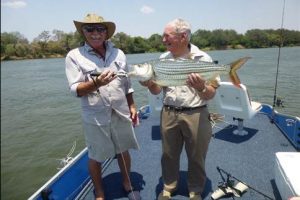 Last week my son and I fled the City of Harare for a fishing trip on the lower Zambezi. We had been invited by a good friend and after a 6 hour drive we came out of the bush to see the great sweep of the Zambezi River in front of us at the Chiwore River mouth. For the ignorant that is about 100 kilometres above Caborra Bassa Dam in Mozambique and about the same distance from Chirundu.

It was hot but a breeze was blowing up the river and the river itself was very full. Lots of weed coming down and a bit dirty – we were told the Kafue flood gates were open and this was flushing out the downstream river before it joined the Zambezi. However, the main influence was the new generation capacity at the Kariba Dam – still one of the largest in the world with 2000 megawatts of generation capacity. All turbines were working.

We were greeted by the staff at the Camp and settled in to our lodges which opened out to the river and were open to the breeze, but kept the resident wild life out. Green lawn cropped down to the roots by the Hippo at night and the massive Acacia trees for shade completed the picture, the dining room/bar area had an infinity pool and Gary spent a bit of time in the water trying to cool off.

We had a marvellous four days on the river. We all caught some decent fish and I lost the largest of course!! Surrounded by wild life of all shapes and sizes and being totally spoiled by the staff who included a superb Chef who seemed determined to make sure we went home a few kilos heavier than when we came. On the first night our host threw a dinner party for Lynn Taylor who heads up an initiative to support the National Parks staff with equipment and facilities such as boats, radio communications, water and power in their camps. She was accompanied by a former army type who now specialises in tracking and hunting down poachers in the vast game reserves that are spread along the river. The local National Parks staff attended and we were informed that the one Ranger at the dinner was probably one of the best in Africa.

At first light we were on the river and on the first day I caught a 15 and a 12-pound tiger – both of which are quite reasonable fish and giving me a great fight in the process. The Zambezi Tiger Fish is not only a beautiful species but possibly one of the best game fish in the world. It has a mouth of teeth that will take a finger off in a second and leave you thinking you never had so much blood in you. Fish as small at 2 to 5 lbs will give you a great fight, especially on the river where they battle all the time against the fast currents and the need to catch their prey.

We drifted over massive pods of Hippo and caught the delicate Chessa for bait and in the process caught some quite decent fish. What we did not use as bait went to the Yellow Billed Kites who trailed our boat looking for scraps and being a nuisance. But I must say that watching those migrants flying in close proximity made you appreciate their incredible flying skills. We were not appreciated by the Hippo and one rose up next to the boat and gave Gary a fright. Close up two tonnes of Hippo is quite a sight. The week before one big bull had grabbed a boat in its jaws and holed the boat so badly that they had to race to the shore where it sank in shallow water.

No cell phones, no internet and no queues or complaints – just sun, water and the wonderful low veld bush and the riverine forest. Can there be any better experience than floating down the Zambezi with your lines out and the sun going down in the west? Then the strike and your reel screaming and the task of setting the hook and getting the fish to the boat with him leaping out of the water some 70 metres away and shaking his head in an effort to throw the hook. Often with Elephant grazing on the bank or in the reeds nearby. I am not a beer drinker, but sometimes I am tempted when you see how much pleasure the guys get from a cold beer at that point.

The Chiwore River does not flow in the winter, but it has a large sand bank at the point where it enters the main river. It was here during the Liberation war when three senior Police Officers slept one evening during a canoe trip to the Coast from Chirundu. While they slept a large group of Guerrillas crossed the main river and entered Zimbabwe to join the war. They passed a few metres from the three men without either knowing they were there. The sand bank shielded the three and saved their lives.

But the river has no memory of those things, it simply lives its life out accepting all who come to it for water or food, or in our case a need to put the problems of our world back into perspective and get a break from the pressures of our daily lives. My son is a Pastor and on a month’s sabbatical from the Church and I could sense the tensions and weariness falling away from his shoulders. His excitement when he caught his first decent fish was palpable.

On Wednesday at about 17.00 hrs we heard two shots on the Zambian side of the river. It sounded like a 500 – a very heavy weapon and was followed by sound of an axe being used to cut out the tusks. We notified Parks to hear that they had also heard the shots and had contracted Zambia. It took the Zambians 24 hours to get there and when they did the vultures and other scavengers were already busy. It turned out to be an old bull Elephant and the poachers were far away by the time the Rangers arrived = had we been able to respond we would have been able to detain the poachers and hold them until the Zambian people arrived. Perhaps this should be allowed or permission granted to go in immediately when such an incident is heard or observed.

All too soon we were on our way home – this time via the road to Kanyemba where a British company is drilling for oil or gas. Then up to the escarpment and home via Mashonaland Central. We passed through small towns where there were no queues – because there was no fuel at all. Then driving into Harare in the late evening getting home to a hot shower and an early night.

In the morning it was clear the world around us had not changed, no miracles had occurred and we were short of many things. But in perspective they seemed less large and intimidating. We knew the real Zimbabwe was out there waiting for us whenever we needed a real break. Just in case you think I boast here is my larger fish and my Zambezi Valley host.