Crisis in Zimbabwe Coalition (CiZC) has noted with concern the brazen attempt by the government and ‘law enforcement agents’ to use force as a way of blocking suffering citizens from demonstrating against the economic meltdown in the country. 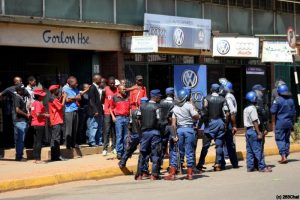 On October 11, 2018, riot police blocked a planned peaceful demonstration by the Zimbabwe Congress of Trade Unions and arrested the union’s leaders. Several ZCTU members were assaulted and the police went on to conduct night raids as they clamped down on the ZCTU members.

The justification given by the ZRP to block the ZCTU protests was that the cholera outbreak has not been fully contained hence public gatherings would increase chances of the disease spreading.

The stance by the ZRP is purely a political move which further exposes the law enforcement agents’ partisan nature and the fact that they operate more as an appendage of the ruling party.

The move by the police comes at a time a number of public gatherings, including church services and graduation ceremonies that attract thousands of people are being held across the capital yet the police chose to ban a street protest on the grounds that there is a risk of people contracting cholera.

The stance by the ZRP is shameless and clearly proves that Zimbabwe is still stuck in the dark past during which the police and the army would used force  to stifle fundamental rights including the right to demonstrate which is enshrined under Section 59 of the country’s constitution.

We are further disturbed that at a time Zimbabweans are living in abject poverty, the government has chosen to be militant against innocent civilians seeking to call authorities to account.

CiZC will continue to support efforts by concerned Zimbabweans to bring the government to account.

We urge Zimbabweans to remain vigilant and continue to demand that the government delivers.

We further implore the responsible authorities to uphold the constitution by respecting fundamental rights such as the right to demonstrate peacefully.