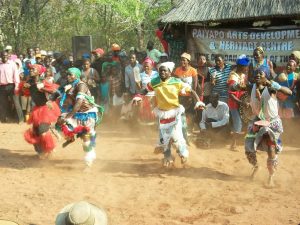 PYD is currently running a project that is intended to mitigate against harmful cultural practices and oppressive powers that has perpetuated the vulnerability and abuse of women and girls in Chipinge district. It was apparent that every time culture and the law meet, more often than not, it is culture that emerges triumphantly with women as victims.

A 9 year old girl survived a rape attack from her father who is a practising traditional healer in Manzvire. The father had scolded and sends away her elder sister before attempting to rape the vulnerable girl, whom he had promised biscuits if she would comply. The girl screamed for help when her father started fondling her private parts. In the same area of Manzvire, a 50 year old businesswoman raped a grade 7 pupil aged 14 years. The businesswoman owns a shop at Manzvire Business Centre. She called the 14 year old boy over to her shop and took him to an inside room where she raped him. Police had to be summoned and upon questioning the businesswoman refused to answer any questions only to confirm the incident when the army personnel were called at the shop. The boy revealed that he was indeed raped. According to the Zimbabwe National Family Planning Council (ZNFPC) Manicaland Provincial Manager Mr Dyson Masvingise, Chipinge District has recorded over 700 new cases of sexually transmitted infections. This report further allude to the fact that women are the most affected as there are cases of vaginal discharge as well as genital ulcers.

Chisumbanje Police are currently attending to a rape case on a daily basis, and the rape victims are normally minors aged between 6 years and 16 years. The perpetrators are male adults who would have been advised by the traditional healers to engage in sex with a virgin as a remedy for being HIV+. This has become a challenge in the local community as the post-exposure prophylaxis (PEP) is not readily available in Chipinge District, and also the required 72 hour period for admission of PEP normally lapses as there are transportation challenges and also cultural impediments.

PYD is appealing to the government to ensure that there are legal provisions that safeguard the minors from sex predators who tend to use culture and misconceptions on HIV as the vehicle through which they can abuse young girls.

“The situation is bad. As an organisation we have been doing work on strengthening young women’s capacity to confront harmful practices, and we believe that our efforts are bearing fruit as there are more people coming forth with their unfortunate experience. I would like to implore the victims to be strong and have courage to report any violation on their rights.” Cynthia Gwenzi, PYD Gender and Advocacy Officer explained.