Zanu PF delights in half-baked solutions which are reactive, not well thought out and often misplaced. The government always runs country through notices mistaken for policy without the backing of a legislative framework. 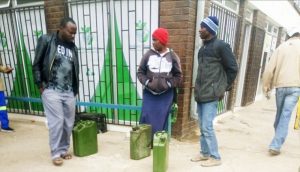 This is the case with the insane, mind boggling proclamation by the Minister of Energy, one Jorum Gumbo purporting to impose a blanket ban on the use of jerry cans and other metal containers. He makes this declaration in a misdirected attempt to combat hoarding of fuel when the government last week claimed that there is enough for everyone.

Isn’t it ironic that the government now spends all its time regulating consumption when the role of the state is to improve aggregate demand and collect revenue to fund the social agenda? Are the people selling fuel not supposed to be in business which is dependent on the level of volumes they push? Why is fuel running out in the first place and why are there long winding queues?

These are the questions that the government must answer in order to find a lasting solution, certainly the answer to these questions are not in the use or ban of a jerry cans.

We have over emphasized the point that the current crisis is a result of fiscal mismanagement which manifests itself in a monetary crisis worsened by the bond note introduced for the sole purpose of monetizing Zanu PF unbudgeted expenditure. The bond note and other forms of money introduced to finance the gap created distortions in the market and increased the price of the US dollar.

With government expenditure and the hunger to spend money offline still unabated funds to import fuel are simply unavailable hence the crisis. The laws of demand and supply can never be fixed by fuel container solutions. More importantly the crisis is a crisis of bad leadership and loss of confidence by the citizen therefore the government’s intention to advice citizens on how to spend fall on deaf ears.

Instead of talking jerry cans we need to address the leadership question through the five point plan outlined by President Chamisa.

When legitimacy issues are addressed fiscal hygiene will be a priority and everything else will fall into place.  The crisis is real, the time for jerry cans is simply not available. Fuel container solution leaders are simply in the wrong place, they must take a rest.