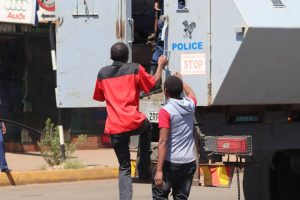 TWENTY-SEVEN leaders and members of Zimbabwe Congress of Trade Union (ZCTU) will spent the night in police custody after they were arrested by Zimbabwe Republic Police (ZRP) officers on Thursday 11 October 2018 and charged with disorderly conduct and committing public violence.

In Masvingo, 12 ZCTU leaders and members, who were represented by Collen Maboke of ZLHR, were released after spending several hours in police detention. ZRP officers indicated that they would proceed by way of summons if they intend to prosecute the labour union members. The 12 include Elliot Meso, Agnes Hlanga, Kevin Mawoyo, Gilbert Sibanda, Tasara Dunia, Richard Munyenye, Davison Madzivire, Tamutswa Chikonyora, Peggie Rukawu, Stephen Madoyi, Chrispen Matipedza and Maxwell Madhunha.

In Harare, ZLHR lawyers Lizwe Jamela, Obey Shava and Noble Chinhanu rescued 26 ZCTU staff and union members, who since morning had been illegally detained at their Gorlon House offices by ZRP officers after the arrest of the labour union’s leaders in a pre-emptive strike to thwart an anti-government protest organised to protest against government’s disastrous economic policies.

Meanwhile, Harare Magistrate Lanzini Ncube on Thursday 11 October 2018 dismissed an application filed by Chinhanu seeking to overturn the ZRP ban of ZCTU’s anti-government protest. In dismissing the ZCTU application, Ncube cited the current cholera outbreak and stated that the labour union’s protest could turn violent as there is discontentment among citizens over the current economic situation.