HARARE - Zimbabwe's economy will grow by 6.3 percent this year driven mainly by agriculture and mining, the finance minister said on Monday, as the government seeks to boost growth after the fall of Robert Mugabe. 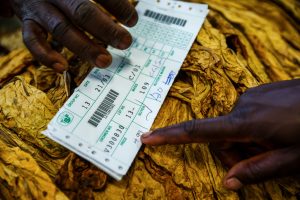 Tobacco farmers point out the best price of USD 4.99/kg attained for the “golden leaf” during the official opening of the tobacco selling season at the Tobacco Sales Floors in Harare on March 21, 2018. / AFP PHOTO / Jekesai NJIKIZANA

President Emmerson Mnangagwa, who was elected in a disputed election in July, has vowed to revive the moribund economy since he took power last year when Mugabe was ousted by a military intervention.

“Indications are that the economy will grow by 6.3 percent against the original budget projection of 4.5 percent,” Finance Minister Mthuli Ncube said at a news conference where the central bank presented a monetary policy statement.

“However the quality of the growth, which is primarily being driven by two sectors of agriculture and mining is obviously not inclusive,” he added.

Ncube, who was appointed after the election, said Zimbabwe faced foreign currency and cash shortages, an unsustainable budget deficit and difficulties re-engaging with international lenders and investors after the Mugabe era.

“These challenges call for urgent reforms,” he said. “Bold decisions need to be taken on the reforms front in order to stimulate growth and sustainable development.”

Ncube said the country was saddled with $16.9-billion debt.

He said Zimbabwe was working to clear a $2.5-billion debt with the African Development Bank and to ask key Paris Club members to restructure a $2.8-billion debt.

Under Mugabe, the economy was shattered by corruption, botched land reforms and government policies that saw investors flee, mass unemployment and the near-collapse of public services.