In 1944, my good friend, the late Nobelist Friedrich Hayek (1899-1992), published the Road to Serfdom. It immediately became an international sensation. In it, Hayek argued that government interventions into markets, whether they be via regulatory mandates or the outright taking of private property, will lead to an initial failure. 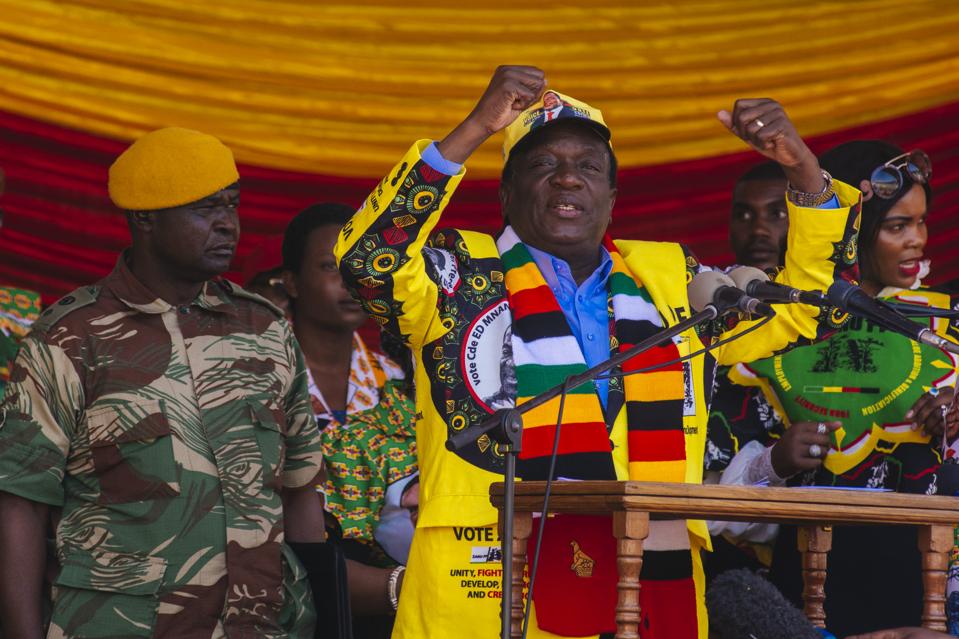 Emmerson Mnangagwa, Zimbabwe’s president and leader of Zimbabwe African National Union – Patriotic Front (ZANU–PF), gestures while speaking during a party rally at the National Stadium in Harare, Zimbabwe, on Saturday, July 28, 2018. Zimbabwe’s political parties made a last-ditch pitch for votes on Saturday ahead of July 30 elections as a campaign distinguished by the absence of widespread violence that marred previous contests drew to a close. Photographer: Waldo Swiegers/Bloomberg

In short, they will be counterproductive. In an attempt to correct its initial errors, the government then does more of the same, only in greater detail. Further disappointments will lead to still more far-reaching and detailed interventionist measures, until socialism and a state of total tyranny are reached.

Such is Hayek’s Road to Serfdom, a road that Zimbabwe has taken. The pilot who took this road was Robert Mugabe. He was aided by the political party he controlled, the Zimbabwe African National Union – Patriotic Front (ZANU-PF), and henchmen, like Zimbabwe’s current President Emmerson Mnangagwa and current First Vice President Constantino Chiwenga. Mugabe and his accomplices sped along with many Marxist ideas dancing in their head.

During Mugabe’s reign, all economic activity was dependent on political decisions, which enhanced the prizes of political power and the stakes in the fight for it. State-owned enterprises, capital controls, price controls, import controls, one-time mining fees, and a plethora of regulations wrapped Zimbabwe in a giant ball of socialist red tape and destroyed the economy.

Measured by real gross domestic product per capita, living standards are now only 78% of what they were when Mugabe assumed power in 1980. When one looks at agriculture, for instance, the erosion is clear. Zimbabwe used to export maize; now it is an importer. Since the land reforms of 2000, the value of farm production has shrunk by 45%.

The fiscal picture is not a pretty one, either. Budget officials took to heart the sentiment behind Mugabe’s rhetorical question in 1997, “Have you ever heard of a country that collapsed because of borrowing?” Zimbabwe’s annual budget deficits averaged 5.4% of GDP during Mugabe’s tenure. The result is a mountain of bad debts and arrears. And if that’s not bad enough, the International Monetary Fund’s most recent edition of the World Economic Outlook indicates that Zimbabwe is one of the poorest countries in the world.

Zimbabwe’s road to serfdom has been punctuated by several notable events and episodes. One of these was the Fast-Track Land Reform Program of 2000, under which land was seized from white farmers. This confiscation land had been happening since 1980, but under the 2000 program, the farms were taken without compensation. Zimbabwe’s Supreme Court declared the program unconstitutional, but Mugabe’s government ignored that ruling.

This flagrant abuse of property rights and the rule of law sent the economy into a deep dive. From 2000 to 2008, real GDP per capita contracted on average by 8.29% per year. During this period, Zimbabwe ran large fiscal deficits financed by printing money. In consequence, it experienced the second most severe case of hyperinflation in history, one which I was able to accurately measure.

On Nov. 14, 2008, the annual inflation rate peaked at 89.7 sextillion%. Prices doubled every day, making Zimbabwe’s 100 trillion dollar notes worthless. In the end, the government was forced to scrap the Zimbabwe dollar, because Zimbabweans simply refused to use it.

Mugabe’s government then instituted a system in which the U.S. dollar became the coin of the realm. Government accounts became denominated in U.S. dollars in 2009. As a result of dollarization and the installation of a national unity government, which lasted from 2009 to July 2013, the economy rebounded. During this period, real GDP per capita surged at an average annual rate of 11.2%. The minister of finance, Tendai Biti, who was a member of the opposition, understood that under a dollarized regime, the country would no longer be able to print money to finance deficits. Consequently, budget deficits were almost eliminated.

With the collapse of the unity government and the return of Mugabe’s ZANU-PF party, old habits resurfaced. Fiscal deficits ballooned — something that should not happen under “dollarization rules.” But, rules meant nothing to Mugabe.

To finance its ballooning deficits, the government began to issue an enormous number of “New Zim dollars” in 2016. As night follows day, Zimbabwe experienced another bout of hyperinflation in 2017. This second episode had Zimbabweans (read: Mugabe’s serfs) up in arms. This hyperinflation opened the door for Mugabe’s ouster. After 33 years of taking Zimbabwe down the road to serfdom, Mugabe was out.

But, after an election earlier this year, who was in? Mugabe’s old allies; the ones who assisted him in driving Zimbabwe into an economic ditch and instituting a reign of terror.

So, what should the Mnangagwa government do to put Zimbabwe on a road to recovery and liberty? Zimbabwe should adopt the strategy of Lee Kuan Yew, Singapore’s first prime minister. That strategy was based on four principles: stable money, no foreign aid, first-world competitiveness, and the protection of private property and the public’s safety. Mr. Lee’s near perfect execution of the strategy was a result of the fact that he surrounded himself with first-class civil servants and paid them first-wages. As a result, Singapore escaped the grinding poverty it faced in 1965 to become one of the world’s most affluent countries.

So far, the Mnangagwa government has not expressed interest in adopting any of the elements of the Singapore Strategy. Nor have members of his government displayed the kind of competence required to tow the economy out of the abyss. Zimbabwe remains in an economic ditch and the storm clouds are gathering.