THE High Court has overturned an irrational decision by Zimbabwe School Examinations Council (ZIMSEC), which had barred a 15 year-old teenager from sitting and writing her Ordinary Level examinations. 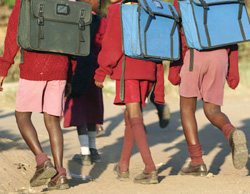 ZLHR through its lawyer Denford Halimani petitioned the High Court on Thursday 11 October 2018 by filing an urgent chamber application seeking an order to suspend ZIMSEC’s decision, which was described as irrational.

In her application, Winnifrida argued that  Shelter was not in possession of any identity document as she is a minor who hasn’t turned 16 years and as a matter of policy she could not be issued with such a document by the Registrar-General. Winnifrida also stated that Shelter had applied for a passport in September 2018, which was not yet issued and therefore she could not produce a passport at the time of writing her examinations.

Winnifrida argued that ZIMSEC’s decision is discriminatory as it does not apply to other minors who are not attending private schools and violates the minor child’s rights to education and administrative justice.

She also submitted that barring Shelter from writing her examinations would be unjust and would seriously prejudice her prospects in life.

This resulted in High Court Judge Justice Davison Foroma granting the order sought by Winnifrida and suspended ZIMSEC’s decision to bar Shelter from sitting and writing her November 2018 Ordinary Level examinations and also ordered that Shelter is entitled to sit and write her Ordinary Level examinations for November 2018 at a local private college upon the mere production of her birth certificate.