With her software lingo, domestic worker Talent Pachenah has secured an interview with tech startup SweepSouth for their office team. 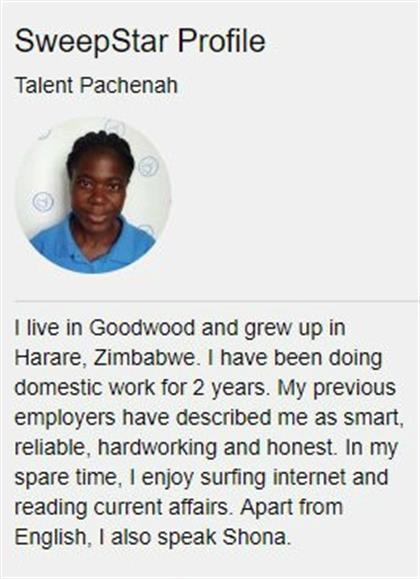 Cape Town software developer Darryn van der Walt was so impressed when his domestic worker walked over and casually spoke his lingo that he decided he had to promote Talent.

And his efforts paid off overnight. Talent Pachenah found out that she had secured a job interview with tech startup SweepSouth for their office team.

Van der Walt, who works from home, explained to News24 how it all started.

“I had used her services [through SweepSouth] for about a month. I just knew she was lovely,” he said on Thursday.

When she first arrived at their home, she made a huge impression when she spent a good five minutes talking to their two small rescue dogs.

Pachenah came up behind him while he was on his computer on Wednesday and told him she loved coding.

“That’s when I was really surprised because she said she had a degree.

“She was bubbly and throwing lingo and code at me, and saying how she loves it.”

Van der Walt realised she was despondent because she had not had a chance to use her degree.

Pachenah, who grew up in Zimbabwe, did little projects on her tablet but did not have industry experience behind her name.

When he looked online, he saw that most junior developer positions required a year’s experience.

“She is way more passionate about coding than cleaning, but at the same time she is a super amazing person.”

He decided to tweet SweepSouth on Wednesday and asked if they had any junior developer positions where she could gain practical experience.

He added on the Twitter thread: “Even better, considering you literally have a rating system in place for her and know exactly what kind of hard worker she is. I can happily vouch for her. She should be behind a computer creating beautiful code! If not you, is there any chance you can help find her something?”

Aisha Pandor, co-founder of SweepSouth, said they were so happy that Van der Walt alerted them to her potential.

They contacted her to get an idea of her skills and set up an interview with her at their Zonnebloem offices for next week.

“We are chatting to her about potentially joining the team in a junior capacity. It won’t be the first time we have brought SweepStars to work on our office team.”

She said three other SweepStars (the startup’s term for its cleaners who sign up) had moved to other positions within the company.

This spoke to the power of the marketplace and platforms like the app, she said.

“What is so exciting is that you have got someone who understands the platform and SweepStar app and experience well, a domain expert of sorts, who is then able to potentially work with the team on developing code to build it further.”

After obtaining her diplomas in computers and education, she took up a teaching position in Zimbabwe but had to leave the country when the political situation became too dire.

She said she decided to further her skills in South Africa and obtained a Bachelor of Science in Computing.

“I have a passion for computers. I am looking for more experience,” she said.

Hey @SweepSouthSA! So I was busy writing some software when one of your lovely ladies, Talent Pachenah, quickly pointed out and identified the languages and technologies I was developing in. Turns out she has a degree in dev/db (PHP and C++ background – app dev potential 😉)! pic.twitter.com/cTi0nyaTc9

+1! Talent comes to me as well and is a super hard worker, is always a delight to talk to, and is genuinely passionate about code and dev. Is there anyone out there with an entry level position available? https://t.co/E583cmB51Q