The MDC is shocked by the admission by the acting Prosecutor General that he is captured by the Executive. 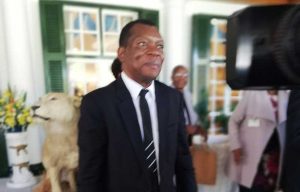 Responding to a question on why he has not prosecuted 27 high profile cases in his locker, he clearly remarked that, “I get instructions from the Executive for prosecutions to be done.” We find this response to be an admission that the NPA is not independent as dictated by the constitution in section 260.

The constitution states that the Prosecutor-General is independent and is not subject to the direction or control of anyone; and must exercise his or her functions impartially and without fear, favor, prejudice or bias.

This is the sole reason why the MDC ensured the constitution separates the office from that of an Attorney General who sits in cabinet.

Hodzi’s statement is therefore a failure to live by dictates of the constitution, on his part he has violated the supreme law of the land and must resign. On the part of those who are giving him instructions from the Executive, they have also failed to uphold the constitution and must face punishment. He must therefore reveal their names.

The revelation by Hodzi reveals why there is a plethora of trumped up charges against senior leaders of the MDC including unsustainable frivolous cases against the membership. It also explains the rot in system which has seen criminals living celebrated lives, walking scot free, lavishly enjoying proceeds of corruption and plunder while the economy is reeling and bleeding.

The MDC has always stated that as an institution at the centre of fighting crime and combating corruption, the NPA must therefore be totally independent, effective and beyond reproach. The institution needs to be strengthened; its decisions must be autonomous and manned by professional personnel.

The admission by Hodzi that he gets instructions from the Executive is a clear indication of an individual who is not fit for purpose.

It is shocking that he is seeking a substantive appointment to a capacity he blatantly mutilated. His revelation however points out to a bigger problem, that of an Executive running down institutions and intimidating those who hold office.

It is a problem which can only be solved by citizen action, the regime has failed to break from the past, it is time they a shown the exit door.

It is time to reclaim the people’s victory.

In the interim there must be a judicial inquiry into capture, corruption and coercion in all state institutions.