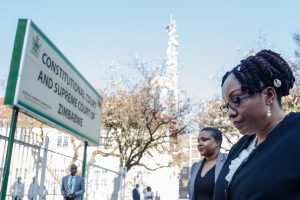 Zimbabwe Electoral Commission (ZEC) chairperson Priscilla Chigumba arrives at Harare courthouse, on August 22, 2018, ahead of the sitting of the Zimbabwe Constitutional Court to hear a petition by the main opposition seeking to overturn the results of the July 30 presidential elections. / AFP PHOTO / Jekesai NJIKIZANA

Various international bodies sent teams to observe or monitor Zimbabwe’s recent general election, and so far three – the Eminent Persons Observer Mission, the EU Election Observation Mission and the IRI/NDI Zimbabwe International Election Observation Mission have issued their final reports.  In this Election Watch we shall summarise the Eminent Persons’ report and their principal recommendations.

What Was the Eminent Persons Observer Mission?

The Electoral Support Network of Southern Africa sent a mission to Zimbabwe to observe the 2018 General Election.  The Mission, known as the Eminent Persons Observer Mission, consisted of 15 regional and eight local observers and was headed by Dr Salamao Tomaz, the former executive secretary of SADC.  It arrived on the 25th July, witnessed the final days of the build-up to the elections and their immediate aftermath, and left on the 1st August.

The Mission’s report was published on 8th September and is available on the Veritas website [link].

The Mission was guided by international and regional standards, in particular the African Charter on Democracy, Elections and Governance and the SADC Principles and Guidelines on Democratic Elections.

The Mission was briefed by representatives of civil society organisations, the Police, the main political parties, academics and political analysts, and engaged with other observer groups.  Members of the mission were deployed for three days in all the provinces except Matabeleland North and South.

The report begins on a positive note by saying that the pre-election environment was “peaceful, serene and tranquil” and that political parties were allowed to campaign freely.  The Zimbabwe Electoral Commission [ZEC] managed the election better than in previous years, with greater engagement of stakeholders and “more collaborative” voter education;  this despite last-minute changes in its chairperson and senior staff.  On polling day the Mission reported a high turnout of voters, particularly women, at the 136 polling stations visited by its members, and said that voting proceeded smoothly in a peaceful and orderly manner at most of those polling stations.  The Mission reported the post-election violence that resulted in the deaths of six people, but did not try to apportion blame for that violence.  It also reported the MDC Alliance’s challenge to the presidential election, but did not comment on the merits of the challenge or on the soundness of the Constitutional Court’s judgment.

The Mission noted issues of concern with  the quality and availability of the voters’ roll, the conduct of the media, participation of women, assisted voters, inclusiveness of the process, and the results management system.

It made the following recommendations:

The Mission’s report is not likely to cause offence and is somewhat  bland, but, so far as it goes, it is fair.

The Mission arrived in Zimbabwe only five days before polling in the election so its analysis of the pre-election environment was not based on lengthy observation.

Its observers were deployed for only three days in all the provinces except Matabeleland North and South.

Furthermore the mission left Zimbabwe two days after polling day, and although it was in Harare when violence erupted its members do not seem to have observed the violence or its suppression by the Army.  Hence the report does not comment on the violence beyond saying that the Mission issued a statement condemning it and urging all parties to resolve their disputes through the courts.

The Mission’s report did not deal with some important issues of concern in the election, in particular: the legal framework under which the election was conducted, the use of State resources for electioneering by the incumbent President, and opaque party funding.

Another important issue not dealt with is the accuracy of the results released by ZEC.  The report does not say whether members of the Mission observed the counting or collation of results, nor what access ZEC gave them to its internal processes.  In any event, the Mission left Zimbabwe before ZEC announced the results of the presidential and parliamentary elections so they would not have had much time to do any careful observation.

The recommendations contained in the report are useful, but like the report itself they are uncontentious.  They do not touch on difficult questions such as how ZEC can become more trusted by the electorate or how politicians and parties that lose elections can be induced to accept defeat.  It is a pity the Mission did not tackle these questions because we must find answers to them if we are to restore trust in the electoral system.