Ever aware of the erosion of our rich cultural expressions, this year Bulawayo-based cultural organisation Nhimbe Trust joins the world in raising awareness of the need to protect and promote our endangered cultural heritage of an intangible nature – that which cannot be touched; not solid in substance – and doing something about it. 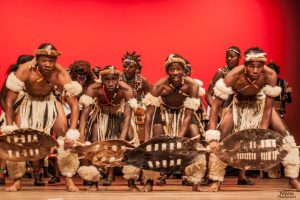 The main objective of the project, which has already begun to roll out, is to enhance the capacity of communities to safeguard traditional dance expressions as performing arts heritage in western Zimbabwe.  Funded by UNESCO under its 2003 Convention for the Safeguarding of the Intangible Cultural Heritage, the project will involve communities across 6 districts of Matabeleland, and Bulawayo.

UNESCO 2003 Convention for the Safeguarding of the Intangible Cultural Heritage

The Convention for the Safeguarding of Intangible Cultural Heritage was passed by the UNESCO General Conference held in 2003.  At that time, the international community recognised the need to raise awareness about cultural manifestations and expressions that until then had no legal or programmatic framework to protect them.
Along with other international instruments that protect cultural heritage – such as the Convention concerning the Protection of World Cultural and Natural Heritage – the 2003 Convention is aimed at safeguarding the uses, representations, expressions, knowledge and techniques that communities, groups and, in some cases, individuals, recognise as an integral part of their cultural heritage. This intangible heritage is found in forms such as oral traditions, performing arts, social practices, rituals, festive events, knowledge and practices concerning nature and the universe, and traditional craftsmanship knowledge and techniques.

Zimbabwe ratified the UNESCO Convention for the Safeguarding of Intangible Cultural Heritage in 2006.
The UNESCO Convention for the Safeguarding of the Intangible Cultural Heritage defines intangible cultural heritage as the practices, representations, expressions, knowledge and skills – including the instruments, objects artefacts and cultural spaces associated with them – that communities, groups and individuals recognize as part of their cultural heritage.  This intangible cultural heritage is transmitted from generation to generation and is constantly recreated by communities and groups in response to their environment, their interaction with nature and their history, and provides them with a sense of identity and continuity, thus promoting respect for cultural diversity and human creativity.  The main purposes of the Convention are to safeguard such heritage, to ensure respect for it, to raise awareness about its importance and to provide for international cooperation and assistance in these fields.

Traditional dance in Zimbabwe expresses the spiritual, social and ceremonial mores of the community and is integral in defining cultural identity; and due to its participatory nature contributes to social cohesion.  The Nhimbe Trust project aims to safeguard selected traditional dance practices, at a community level and in the spirit of Article 13 (d)(i) of the 2003 Convention, as a component of performing arts heritage, through research and documentation, the compilation of an inventory of associated elements, and activities designed to enhance the inter-generational transmission of that heritage.

The bearers and custodians of the elements of our cultural heritage stand at the heart and are at the same time the main stakeholders in the safeguarding processes, and the project will build the capacity of the selected communities by teaching the skills necessary for them to undertake an inclusive and participatory community-based safeguarding and inventorying process of elements of their own performing arts heritage associated with dance, from which an inventory will be produced.  Inventoried elements will include ritual/non-ritual, lyrical content, language, imbued knowledge, instrumentation, choreography, staging, props and costume.

Project Partners
Hand in hand with the traditional leaders and custodians of the intangible heritage in the communities concerned, working partnerships for this project have been established with the Zimbabwe National Traditional Dancers Association, Amagugu International Heritage Centre (headed by the highly respected Zimbabwean historian and writer Pathisa Nyathi), Basilwizi Trust, the Ministry of Sport, Arts and Recreation and Nhimbe’s cultural hub the Bluez Café.

In the Foreword to the 2016 edition of the Basic Texts of the 2003 Convention, Irina Bokova, Director-General of UNESCO, wrote:

“At a time when the world is seeking new ways to further peace and sustainable development, there is a pressing need for unifying projects which bring us together in all our diversity. The 2003 Convention for the Safeguarding of the Intangible Cultural Heritage is one such opportunity for dialogue and action. Every State, every community can assert its rights in this framework, share its own vision and release the creative energy of cultural diversity to consolidate our common values.

Culture is a renewable resource par excellence and a major dimension of sustainable development. Culture is a force for social inclusion and collective mobilization.  Experience proves that the acknowledgement of cultural heritage in the design and conduct of development policies is key to the active participation of communities and to the effectiveness of programmes in the longer term. The United Nations 2030 Agenda for Sustainable Development, which was adopted in 2015, acknowledges for the first time at this level this crucial role of culture as an enabler for sustainable development and mutual understanding.  The implementation of the 2003 Convention will be a key contributor to the implementation of this vision.

UNESCO’s Convention for the Safeguarding of the Intangible Cultural Heritage is a key constituent in this advocacy work.  Thirteen years after its adoption, the Convention has already secured the accession of 170 Member States. This impressive rate says much about the attachment of peoples to their intangible cultural heritage and about the relevance of our standard-setting action in this area. The expression ‘intangible heritage’ has entered everyday speech and the need to safeguard it is widely recognized.  …

Going forward, the most pressing need is for capacity building, which is the main lever for the implementation of the 2003 Convention. …   I wish to reaffirm UNESCO’s determination to carry on with this work, in the firm belief that intangible cultural heritage plays a central role in the construction of peace and sustainable development.”   (http://unesdoc.unesco.org/images/0024/002465/246582E.pdf)