Three people are believed to have died this morning when a twin- engined light aircraft crashed near Renco mine in Chiredzi. 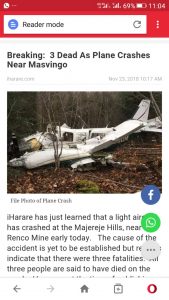 Police are at the scene of the crash to begin the gruesome task of retrieving the dismembered bodies.
Apparently on the the deceased was a Finnish national. The nationalities of the other two is not yet known although it is believed the pilot could be Zimbabwean as the aircraft was registered to a Harare- based company.