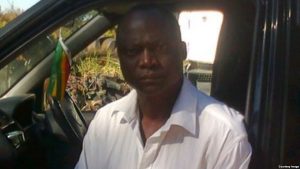 It is sad the Commission of Inquiry into the August 1 shootings has reportedly shut the door on Retired Colonel Elliot Piki who was allegedly abducted on Sunday by state agents and – thank God – was able to escape alive according to media reports which I trust as the case has been reported to the police. The move is typical of Zanu PF who do not want to be embarrassed anymore as all the witnesses they sponsored to testify have all been caught not telling the truth. They cannot stand another witness who will testify against the army, especially one who was abducted just a few days ago, giving more testimony that will incriminate Zanu PF and their major tool of repression – the army, so must have instructed the Commission not to have any more witnesses.

Mnangagwa has now been exposed. He had managed to mislead the world into believing that he is different from Mugabe, and was trying to further mislead the same world through this Commission, but thank God, all people who have given evidence trying to deny the army did not kill people have been exposed – from the army commanders, to Gabriel Chaibva who said the soldiers were firing at 45 degrees into the air, to Obert Mpofu who tried to use the stupid lie that MDC supporters used snippers.

I think this is the time for the United Nations to intervene. Call a spade a spade and tell Mnanagwa in the face that he is a liar.

I strongly suggest that the Commission of Inquiry into the shootings must allow only Elliot Piki to give his evidence. If they cannot, then the United Nations should, in my opinion, invite him to hear his side of the story. If the United Nations cannot, the Human Rights Lawyers Association or some other organisation should get him recorded giving his evidence and the video should be sent to all diplomatic missions and to media outlets.

The voice of the oppressed must be heard.
The United Nations being the global champion for human rights, particularly women and children, I expect that you will add a voice when a women is traumatised witnessing a husband’s abduction. We need action against such barbaric acts by a desperate regime.