An influential group from Zimbabwe’s ruling ZANU-PF party is calling for proponents of targeted sanctions against top government officials to be “punished severely.” 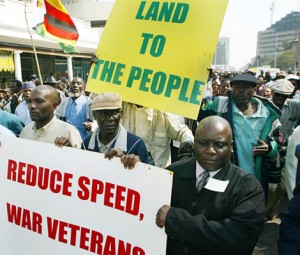 The group, known as the “war veterans,” have recently urged parliament to enact a law to criminalize the call for sanctions, with punishments similar to murder and rape. Speaking before parliament on Tuesday, a ZANU-PF member said those who call for sanctions should be given the death penalty.

The apparent targets of the proposed legislation include opposition leaders Nelson Chamisa and former finance minister Tendai Biti, both of whom have publicly supported sanctions against officials implicated in corruption and serious human rights abuses.

The United States first imposed targeted sanctions on Zimbabwe in 2001, followed by the European Union in 2002, over concerns of political violence, serious rights violations, and media restrictions in the country.

The US has not been expected to lift sanctions after the July 30 elections, which were marred by violence and alleged fraud. Last month, the Trump administration confirmed it would maintain sanctions, including travel bans and asset freezes, against 141 entities and individuals. “We want to see fundamental changes in Zimbabwe and only then will we resume normal relations with them,” Manisha Singh, assistant secretary of state for economic and business affairs, recently testified to Congress.

Since coming to power last November – after Zimbabwe’s leader of 37 years, Robert Mugabe, was ousted in a military coup – President Emmerson Mnangagwa has repeatedly claimed the country has turned a page toward respect for the rule of law and human rights. Moving forward with the proposed legislation to criminalize sanctions proponents would not only be a major setback for free speech but would also fly in the face of Mnangagwa’s stated commitment to reform.

Mnangagwa should dismiss the war veterans’ proposed legislation and instead take concrete action to improve respect for human rights and accountability for serious abuses.