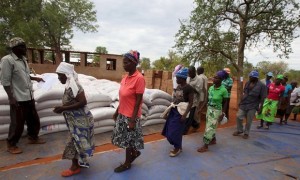 Markets in Zambia appear to be experiencing stress earlier this year, and in mid-October, the Zambian Government imposed temporary restrictive measures on the exportation of maize grain/ meal products to help secure national strategic reserves.

From September to October, Zimbabwe’s inflation rate surged from approximately 5 percent to 21 percent, and its food inflation rate reached approximately 27%. This is a cause for concern as the lean season progresses. A market assessment is currently underway, and we will continue to closely monitor the situation.