At least 47 people were killed in Zimbabwe on Wednesday when two buses collided on a road between the capital Harare and the southeastern town of Rusape, police confirmed to AFP. 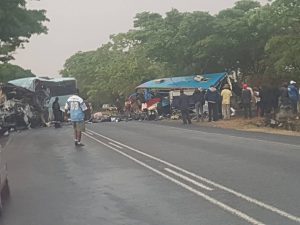 “We confirm 47 people have died in a road traffic accident at the 166-kilometre peg along the Harare-Mutare highway,” police spokesman Paul Nyathi said.

Traffic accidents are common in Zimbabwe, where roads are riddled with potholes due to years of underfunding and neglect, but the highway where the accident occurred had been recently resurfaced.

In June last year, 43 people were killed in a bus crash in the north of the country, along the highway leading to neighbouring Zambia.