In most countries, a 79 percent leap in share prices over just 11 days would normally suggest a surfeit of investor confidence. 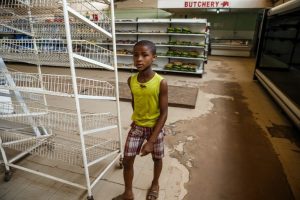 A young boy walks past empty shelves, including those for bread and meat products, in a groceries store in Harare CREDIT: JEKESAI NJIKIZANA/AFP/GETTY IMAGES

In Zimbabwe, home last month to the world’s best performing stock market, it has been a sign of panic and inflation, just another terrifying financial statistic in a country that has been a world-beater at producing them.

Nine years after inflation hit 89.7 sextillion percent and the central bank authorised a 100-trillion Zimbabwean dollar banknote — still too little to pay for a local bus fare — the country is again mired in financial woe.

It should not have been this way. A year ago this month, the coup was launched that finally ousted Robert Mugabe, the nonagenarian autocrat blamed for turning one of Africa’s most promising economies into a dysfunctional supplicant.

Zimbabweans celebrated on the streets, dancing euphorically with the soldiers they hailed as liberators. Many felt their country would be unleashed both from tyranny and immiseration.

But in the 12 months that have passed, many have reached the gloomy conclusion that getting rid of a dictator is easier than erasing his legacy.

As a result of past mismanagement, profligate government spending and a failure to institute economic reforms by Emmerson Mnangagwa, the new president, Zimbabweans are facing a twin currency and inflation crisis.

Prices have sky-rocketed. Richer Zimbabweans complain that the cost of their weekly shopping skyrocketed by 40 percent, while the poor are suffering even more.

The collapse of industry in Zimbabwe means that the cost of about 90 percent of of goods, including staples like flour, sugar and cooking oil, have gone up by about 20 percent. Getting enough to eat is again a major challenge for hungry families.

Hyperinflation was finally brought under control in 2009 after the Zimbabwean dollar was finally abolished.

The economy stabilised after Mr Mugabe was forced to accept a coalition government with opposition control over the finance ministry, and Zimbabweans chose to use the US dollar as their currency.

These methods of payment  were at first interchangeable with the US dollar but values deteriorated and plunged in the last few weeks with the rate briefly hitting ten local dollars to US$1.

So prices began rising and panic quickly set in as some, remembering the economic crash a decade earlier, went to spend their money before they feared it would lose all its value.

Crowds formed outside fast-emptying supermarkets, with people desperately trying to stock up on basic grocery items.

Fast food chains, such as South African-owned franchise Kentucky Fried Chicken, said it had to shut down because it ran out of chicken  and locally produced fast food outlets almost doubled prices.

Richer Zimbabweans found that often the only way to turn bond notes into dollars was to buy shares in foreign companies listed on the local stock market, explaining why prices have soared.

But nowhere has the situation been as grave or as tragic as in the health sector.

Inside a hospital in Chitungwiza, a commuter town outside Harare, HIV positive Zimbabweans have been queuing in an increasingly frantic attempt to source anti-retrovirals, the vital medicines that give them a chance of life. Fourteen per cent of Zimbabwe’s sexually active adult population are HIV positive.

Patients used to be given a month’s supply of the medicine at a time, but now, there is only enough to give four days’ worth to each patient, necessitating more frequent trips for those who can ill-afford to make them.

In Bulawayo, many have resorted to social media to get medication.

“Urgently need the following anti-psychotic medications: either Sodium Valproate or Epilim” reads one message on a WhatsApp group used mainly by the old and the poor.

For Portifa Mwendera, president of the Pharmaceutical Society of Zimbabwe, the crisis has reached nightmare levels. Pharmacies were either selling medication only in US dollars, which most people do not have, or had ratcheted the prices up to unaffordable levels for those who could only pay with bond notes, he said.

Efforts by a cash-strapped government to intervene have inevitably been paltry, with only £2.3m made available for an emergency fund for medicines.

Zimbabwe once made three-quarters of its own drugs, but like in so many other sectors, mismanagement ultimately resulted in ruin. State-owned health facilities that were sophisticated at independence in 1980 are now dilapidated or barely functioning, while nearly all medicines are now imported.

Mr Mnangagwa, who has positioned himself as a pragmatic moderniser despite having been a deeply loyal ally of Mr Mugabe, will have to act fast to end the crisis.

Yet his options are limited, and he has been blamed for exacerbating the turmoil by increasing already unsustainable levels of government spending to win votes ahead of last July’s presidential election.

But cutting government expenditure would mean slashing Zimbabwe’s bloated civil service – a deeply unpopular move, sure to alienate many in the already divided Zanu-PF.

Nor can the president approach the World Bank or International Monetary Fund until Zimbabwe pays off more than £1 billion in debt arrears — money it does not have.

US sanctions are likely to remain on hold until Mr Mnangagwa can show democratic discourse.

Suspicions that he is not prepared to do so mounted when soldiers fired at unarmed protesters in the streets and killed six people just two days after the contentious election that confirmed Mr Mnangagwa in the presidency.

Mr Mnangwagwa had promised that, on his watch, Zimbabwe would enjoy both economic revival and “a flowering of democracy”. As he grapples with the poisoned legacy of the man he ousted and a country again flirting with financial disaster, Zimbabwe’s new president is likely to find it increasingly hard to deliver either.