Zimbabweans have reacted with stunned disbelief to the testimony by two generals who denied troops killed six people in August when the military was called in to crush protests following the country's disputed elections. 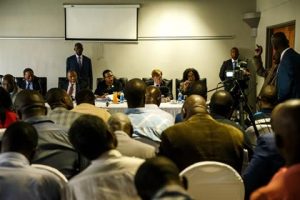 The generals suggested that Zimbabwe’s opposition was responsible for the killings.

Zimbabweans and opposition leaders on Tuesday expressed outrage at the denials and the lack of a serious investigation by police into the killings.

On August 1, armed soldiers were deployed in the capital, Harare, to suppress a protest against delays in announcing results of the country’s first elections without former ruler Robert Mugabe.

Despite widely published photos and video showing the Zimbabwean army soldiers firing on people in Harare’s streets, the generals said under oath that they do not believe the troops shot at people.

“I do not believe that any of the soldiers fired. Yes, they fired in the air, but I do not believe any could have aimed shots at the civilians. I have no reason to believe that one of the soldiers could have shot and killed those people,” said Zimbabwe Defense Forces Commander General Philip Valerio Sibanda, during the nationally televised hearing.

The tactical commander of the military unit, General Anselem Sanyatwe, told the commission he suspected “militant” opposition activists who deserted from the army could have shot at protesters, a claim repeated by Sibanda.

When presented with a photo of a kneeling soldier who appeared to be aiming at protesters, Sanyatwe said the man “took that position because he was avoiding missiles that were being thrown at him.”

Some inquiry commissioners and people in the public gallery were visibly stunned by the generals’ denials.

“Is that your evidence?” asked Lovemore Madhuku, one of the commissioners, adding that evidence by other witnesses showed that the shootings coincided with the military’s deployment.

Sibanda countered that he had “heard gunfire well before the troops deployed.”

Motlanthe said the generals’ denials contradicted evidence so far received by the commission from other witnesses who include victims.

Police testified that they have not turned up information that would determine who killed the civilians. The police have not retrieved any cartridges from the city center where the shooting took place, do not have any suspects and have not made any arrests, said Police Detective Chief Inspector Edmore Runganga, who is leading investigations into the August 1 killings.

Crisis in Zimbabwe Coalition, a local non-governmental organisation on Tuesday said it is “perturbed by the misleading evidence presented by top army and police officers. … We note an apparent attempt to blame the opposition, business and ordinary citizens for the shootings and this will likely lead to a witch-hunt that will see continued persecution of hundreds of activists that were arrested in the aftermath of the killings,” said the organisation in a statement.

“The army did not shoot at anyone, like seriously? This is all turning into a circus,” Ethel Sambiri, a Harare resident told The Associated Press on Tuesday.

David Coltart, an opposition member of parliament, tweeted Tuesday: “The commission of inquiry into the 1st August shootings in Harare took a farcical turn yesterday. People were killed with bullets fired by soldiers and witnessed by tens of foreign journalists. Now the military deny they killed the people but the truth is plain to see.”

“This just confirms our previously stated position that this commission of inquiry is a farce, a process meant to cleanse the army and put blame on the opposition,” said Mafume. “We are not taking it seriously.”